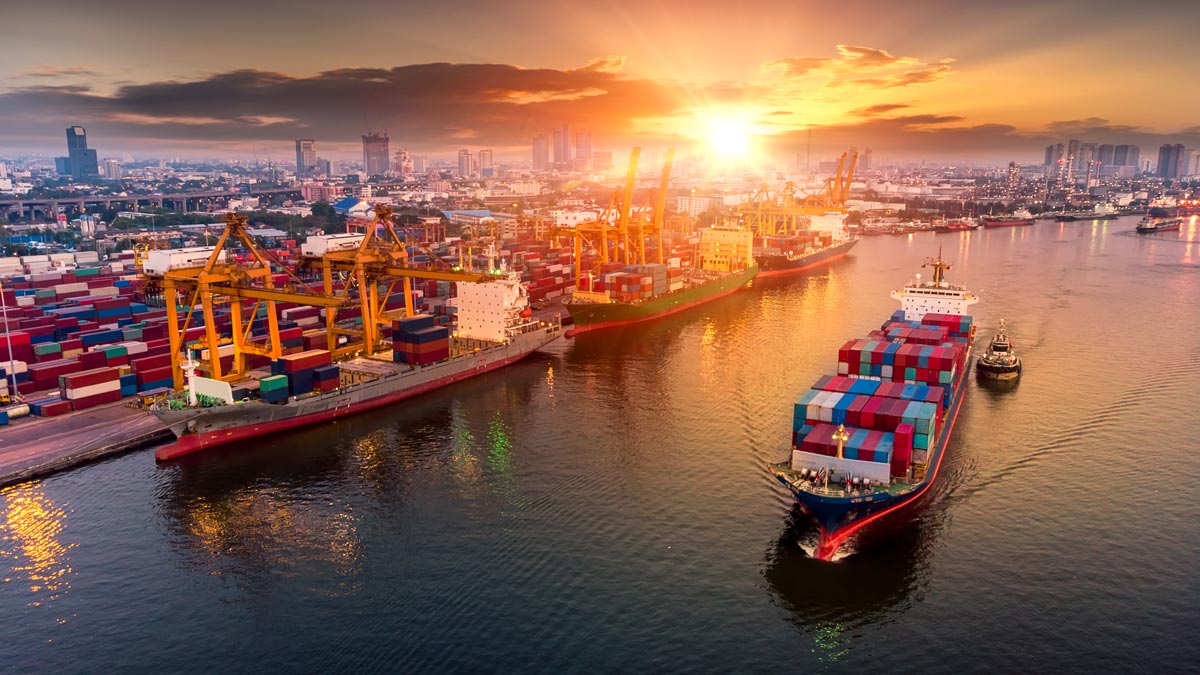 Carl reports on what he learned during his summer vacation.

It was nice to be away last week on my summer vacation.  I finished three books, none of which had anything to do with economics.  The hot policy debate I partook in centered on which bakery had the best cherry pie, a welcome departure from arguments over corporate tax reform.  The waves I watched were cascading across the lake, not my Bloomberg terminal.  It was a refreshing change of pace.

Of course, I couldn’t turn off my inner economist entirely.  We were confronted with labor market issues almost everywhere we went: staff shortages were ubiquitous, with some attractions closed in the middle of the week for want of help.  Most infuriating for me were the long lines at my favorite ice cream parlor, which was operating with a fraction of their normal summer team.

We also noticed shortages of a range of goods.  Boats were in extended dry dock for want of parts.  There were lots of shoppers about, but inventories of t-shirts and knickknacks were often thin.  One proprietor told me that he had been waiting for months to receive a merchandise order that used to arrive within days. 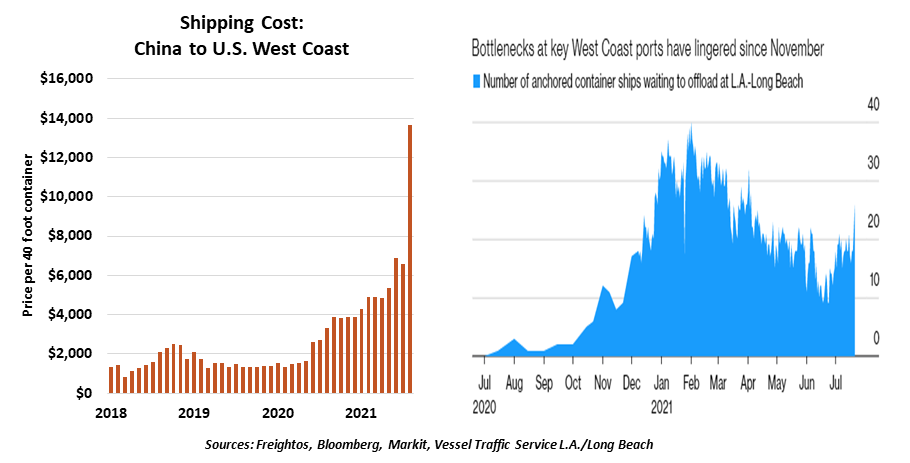 As I connected these anecdotes with more formal reading upon my return, it became clear that the supply chains upon which economies rely are far from full health.  As a result, inventories are being run down, and are proving difficult to replace.  With China and southeast Asia struggling with the Delta variant of COVID-19, scarcity could get worse before it gets better.  All of this could greatly complicate the outlook for growth and inflation.

Before I left, it was announced that the U.S. economy grew at an annualized rate of more than 6% in the second quarter.  That is very strong…but fell far short of expectations.  Forecasters had expected inventories to be replenished last quarter, but they fell sharply for the second quarter in a row.  In some situations, firms will conserve on inventories to stay lean; but with demand booming, it seems more likely that frictions in production and logistics are at play.

We’ve been seeing evidence of this in economic indicators for months.  Manufacturers report that delivery timing has stretched out to new lengths; a record fraction of small businesses report that inventories are much lower than they would prefer; and shipping costs are skyrocketing.  For some products (like cars), sales growth has been inhibited by lack of availability. 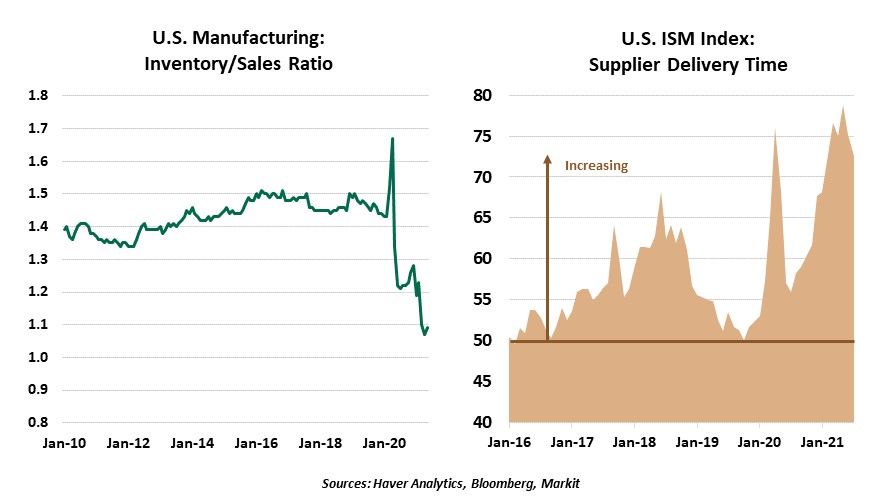 We’ve written about some of the elements that have contributed to this situation, including shortages of semiconductors, reconfiguration of assembly lines to respect public health restrictions, and slower loading and unloading at ports.  Caches of shipping containers, rail cars, and cargo planes are struggling to reach the factories and ports where they are needed.

The complications created by COVID-19 will not help the situation.  We do not get full accounting of cases from China, but reports suggest that the outbreak there is the worst since the earliest days of the pandemic.  Air travel within China has fallen off significantly, and lockdowns have been reported in several parts of the country.  China has likely resorted to these measures because its domestically-produced vaccines have shown much more moderate efficacy against the Delta variant than Western alternatives.

The outbreak is more clearly documented in Vietnam, Thailand, and Malaysia, where vaccination is low and cases have jumped.  All contribute importantly to the global production of goods.

For the time being, China remains the world’s factory.  Production delays or stoppages there create ripple effects throughout the global economy.  The interruptions come at a particularly sensitive time, as products intended for sale during the holiday season are typically assembled and shipped during the late summer.

As we have noted in earlier writings, demand is far out in front of supply in developed economies.  For services, this has resulted in higher prices for hotel rooms, restaurant meals, and air fare.  We continue to think that the labor supply will rise to meet demand in the coming months as pandemic-related employment support (jobless benefits, furlough plans) expire.  That should curb the inflation we’ve seen in the service sector.

In the goods sector, however, it may take longer to bring supply and demand into closer alignment.  Output may remain suppressed for some time as the latest wave of COVID-19 infections crests.  Even if production was at its peak, the ability to distribute goods to their intended destinations remains limited.  Modern manufacturing chains rely on precise timing and coordination, and have limited redundancy.

Over the long term, a number of countries and industries have expressed intent to “near-shore” production to shorten supply lines and reduce dependence on China.  But shifting geography is expensive and can take time.  For now, COVID anywhere creates economic problems everywhere.

Persistent imbalances between demand and supply place upward pressure on prices.  With lots of saving to spend, consumers may be willing to pay those prices.  Costs for apparel, appliances, and toys, among other goods, are rising much more rapidly than they were prior to the pandemic.  And they may continue rising at an advanced pace for a while.

This could present a problem for central banks, who have been dismissing recent spurts in consumer prices as largely transitory.  There is no clear dividing line in time that distinguishes the fleeting from the lasting, but the bottlenecks present in global production systems could end up testing the patience of monetary policy makers.  They could be prompted to tighten sooner and more forcefully than currently anticipated, triggering an adverse reaction in markets.

Fortunately, there is no supply chain involved when picking and eating a cherry in an orchard.  It was nice to keep life simple for a week…but my inner economist knew that the return to reality would be much more complicated.