Unrest has some economic drivers, consumers are ready to spend, and investment in China grows more complicated. 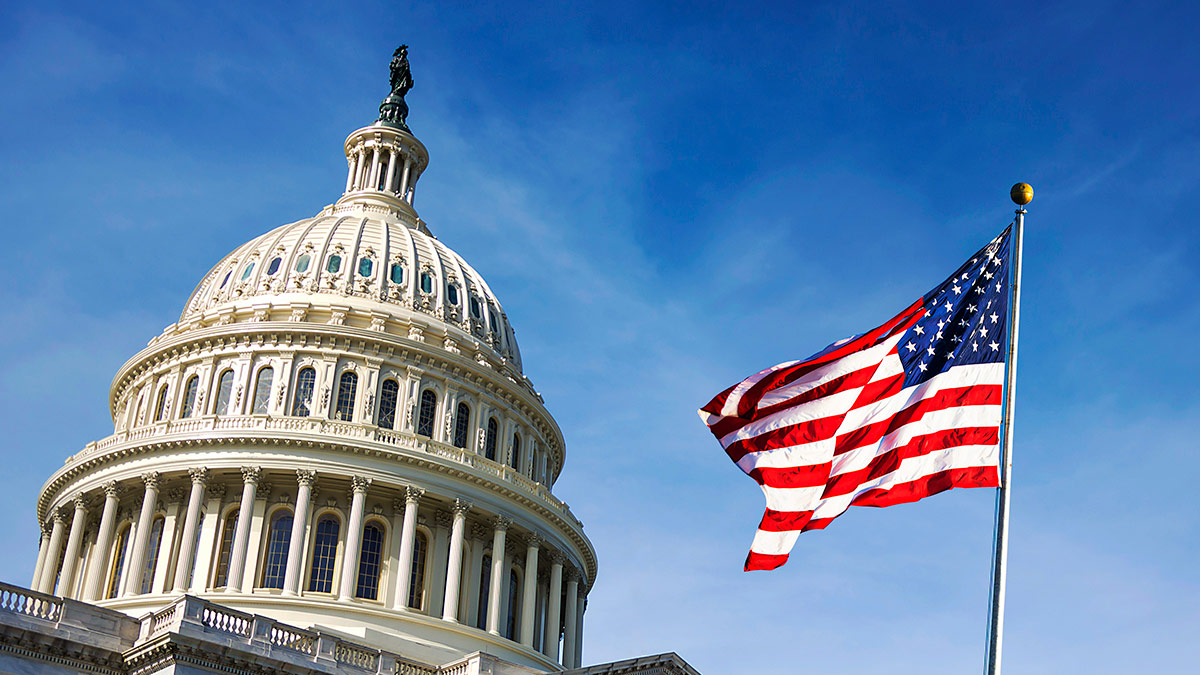 There are a number of movies that depict assaults on Washington D.C. “Independence Day,” “Olympus Has Fallen,” “White House Down” and “Mars Attacks!” are among the films in which intruders besiege the U.S. capital.

As they say, life sometimes imitates art. Thankfully, the brief occupation of the Capitol building last week didn’t result in the kind of destruction that can be produced with cinematic special effects. But the damage to the nation’s sensibilities was significant.

The debate over who—or what—caused the uprising is in full swing. Although it was individual people who pushed past guards and led the charge, they were inspired by their leaders. Federal investigators and the U.S. Congress are in the process of determining who should face legal action.

But broader themes also contributed to the mayhem, at least indirectly. Some have blamed the influence of the media and online networks for contributing to extreme partisanship. Politicians on both sides of the aisle have been blamed for their failure to counsel moderation and perspective. Diminished trust in institutions and authorities has allowed alternative narratives to gain currency.

Long-term economic change played at least a supporting role in fostering the discontent that boiled over last week.  Understanding and addressing this root cause should be an important part of the reckoning that follows.  And the lessons learned in Washington should be studied in other world capitals.

2016 was a watershed year at the ballot box. The Brexit referendum that summer put the United Kingdom on the path to separation from the European Union. The U.S. election that autumn installed a new president who espoused a doctrine of “America First.” Those outcomes were a direct result of rising public dissatisfaction with the international order and the intellectuals, politicians and bureaucrats who celebrated it.

Economists can point to the positive outcomes of free trade, including more choice, lower prices, reduced global poverty and wealth creation. But some domestic firms and industries have struggled to keep up with global competition, and have seen their fortunes fade. Communities in many nations have struggled to maintain their standards of living. Inequality of wealth and incomes have expanded, as has underemployment.

While globalization is often blamed for being a root cause of these outcomes, technology is also culpable. For decades, process automation has reduced the demand for workers with basic skills. Robotics have permeated manufacturing and agriculture; analytics and artificial intelligence have re-shaped service businesses. The application of technology is expected to accelerate further in the decades ahead, potentially widening the divides of fortune that exist in society today.

Those who feel left behind, overlooked, and vulnerable have expressed their displeasure at the ballot box. (And, in some cases, in the streets of national capitals.) Many of the candidates they support have vowed to take control back from unelected elites and international organizations that govern commerce. While the economically disaffected are not the sole source of support for populists, nationalist messages resonate with those seeking a path back to prosperity.

One of the central policy expressions of the global trend toward populism has been a host of new trade barriers. While China vs. the United States has been the main event, there are many on the undercard. The World Trade Organization, charged with keeping order in this arena, has struggled to keep up. Walls at borders, real and virtual, have gotten longer and taller.

The economic expansion that just ended ameliorated some of the ill feeling. Unemployment in many countries reached 50-year lows, providing opportunities to people who had struggled to find them. Unfortunately, the pandemic quickly reversed that progress. Once again, those in low-wage occupations are much more likely to be out of work, and those still working are much less likely to be working from the safety of their own homes.

As 2021 begins, equity markets are strong, but economic conditions for many remain challenging. This gives the recovery a “K-shaped” character: those on the upper wing of the “K” have maintained or advanced their fortunes, while others have been pushed to the brink of insolvency. Economic and survey data clearly illustrate that anxieties have returned to the surface 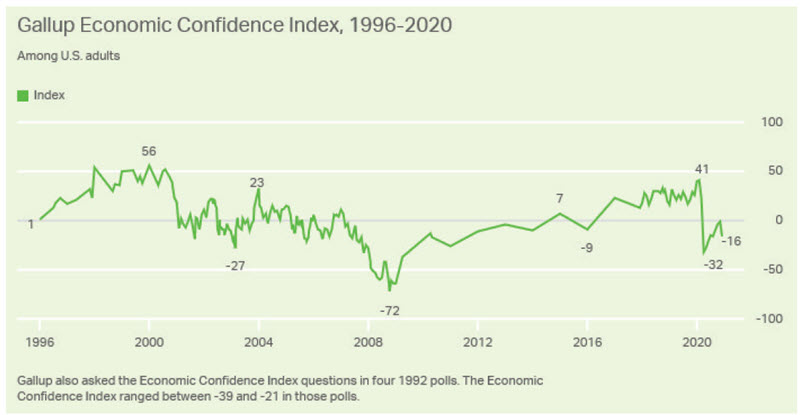 None of the potential steps to address economic anxiety has broad support. Trade restrictions introduced by the United States have not yet produced a lasting change in trade deficits with China, and there is little evidence that manufacturing is being re-shored. Countermeasures from China have hindered the agricultural sector and cost U.S. taxpayers $28 billion in supplemental support for farmers.

Redistributive fiscal policies are thought to dull incentives for the kinds of invention and investment that are critical to long-term economic growth. Offering extended assistance (at the extreme, a universal basic income) is thought by some to dull incentives to work. Transitional programs, like the Trade Adjustment Assistance effort in the United States, have not been effective. Reinforcing and enhancing worker skill levels has promise, but would have to be designed carefully to generate appropriate returns in human capital.

“It will be important to understand and address the economic roots of popular discontent.”

A cross-section of those who stormed the Capitol last week would certainly reveal a mix of backgrounds and grievances; populists draw support from a wide socioeconomic spectrum. But for many, economic circumstances contributed to the decision to storm the barricades.

Washington has understandably been the focus of attention recently, but issues on display there will loom large in Berlin and Paris, which have elections coming up in the next 18 months. Populist parties in Germany, France and other European countries continue to gain support.

None of this narrative is intended to excuse the actions of the invaders, which caused a loss of life and triggered a national crisis. But understanding and addressing the roots of popular discontent will be essential to avoiding a sequel to last week’s horror show.

As we wrote in our annual outlook, the U.S. economy is starting the year slowly but with high potential for future growth. After more than a year of disruptions, cancelled plans and minimal socializing, many of us are eager to get back to our old habits. That could bring a rush of demand and economic growth at mid-year.

The foundations for future spending are strong. We observe:

Savings. Consumers have increased their saving rates during the course of the crisis. Some workers feared long-term unemployment and saved their stimulus checks to help them through a rough year. As shown in the levels of credit card balances, many consumers used the stimulus to pay down debt, allowing them to enter the growth cycle with improved household balance sheets.

Those who maintained their jobs and incomes saved more because they couldn’t spend as they were accustomed to doing. Pent-up demand for dining out, entertainment and traveling could be expressed powerfully once the pandemic is under firm control.

Wealth effects. Diversified stock owners ended up having another winning year in 2020, giving a boost to confidence and spending power. Despite difficulties in March and April, the U.S. Federal Reserve estimates that aggregate household net worth increased by over $5 trillion through the third quarter of 2020, driven largely by the equity market recovery.

Similarly, homeowners in most of the country have enjoyed watching residential real estate values rise. The boom in mortgage refinancing to lock in low rates has also featured a significant uptick in cash-out refinance activities. Homeowners are putting some of their home equity to use.

Stimulus. As Joe Biden takes office with a narrow majority in Congress, the prospects for more stimulus have grown. Biden’s proposal this week seeks to make good on the promise of a larger economic impact payment, and includes longer-lasting unemployment benefits. This additional cash will allow consumers to catch up on overdue obligations, build more of a savings buffer and be better-equipped to spend when businesses broadly reopen.

2020 brought a surge in demand for household goods. 2021 may carry a similar surge in demand for services. We use the word surge because it means strong but not permanent. Growth in goods consumption remains elevated, but should decline this year to normal levels. Services consumption is still depressed after falling off last year, but has immense potential to rebound as vaccination proceeds.

“Many U.S. households are poised for a post-pandemic spending spree.”

There is some concern that a surge in demand will create bottlenecks in the economy and lead to inflation. But the supply side of the economy should be able to respond without too much of a delay. We’ll have more on this topic in future editions.

This speculation assumes many things go right: that vaccine distribution is rapid, that vaccines are as effective as suggested, and that businesses and workers are ready to return to their usual levels of activity. The next stimulus bill is only a proposal, for now: passage and implementation are another matter entirely.

Who among us hasn’t dreamed during the past nine months of dining out without masks or flying to a favorite destination? Public health conditions should allow those dreams to become reality later this year, and financial conditions should help us afford them.

Between a Rock and a Hard Place

Just after he took office, President Trump set a new tone on trade by scrapping the major Trans-Pacific Partnership trade deal. In his final days, the president is still seeking to up the ante.

Throughout his tenure, President Trump has threatened and enacted sanctions on Chinese firms and officials. Even during his last weeks in office, the intensity of that effort remains undiminished. Recent steps to delist Chinese companies that do not comply with U.S. audit standards from U.S. exchanges and to restrict American investors from owning shares in companies linked to China’s defense complex are cases in point. Media reports suggest President Trump is considering adding more high-value Chinese firms to the list.

Investors were already struggling over the scope of last November’s order.  According to Goldman Sachs, U.S. investors hold roughly $1 trillion of Chinese internet and technology stocks. While global indices and investors are warming up to the idea of investing in Chinese debt markets, banks, asset managers and index providers are being forced to offload billions of dollars’ worth of investments to comply with the ban. Filings on the Hong Kong Exchanges and Clearing Limited show that American banks are delisting about 500 structured products in Hong Kong, a move with implications beyond U.S. borders. 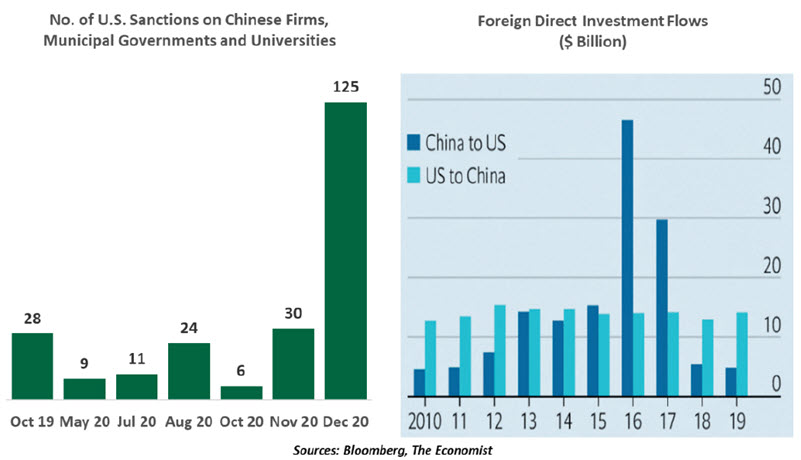 “The battle between Washington and Beijing is creating headaches for investors.”

Foreign investments, particularly into the U.S. from China, have suffered thanks to more stringent investment screening measures. Due to its dependence on American demand, China had largely refrained from using retaliatory measures like blacklisting and export controls. China has now responded by issuing rules allowing Chinese courts to punish global corporations for complying with foreign sanctions.

Global corporations and investors, including U.S. firms, are caught in an economic cold war. Although the incoming Biden administration will have the executive power to repeal some of his predecessor’s orders, it is unlikely to roll back tariffs or all of the sanctions anytime soon. And so stress between Washington and Beijing will likely persist well into 2021, creating substantial uncertainty.

The upcoming lunar new year will usher in the year of the Ox. Investors will certainly hope that the stubborn nature of that creature will not be reflected in the tone of upcoming discussions between China and the United States.