Economic Commentary: Themes of the First Half of 2021 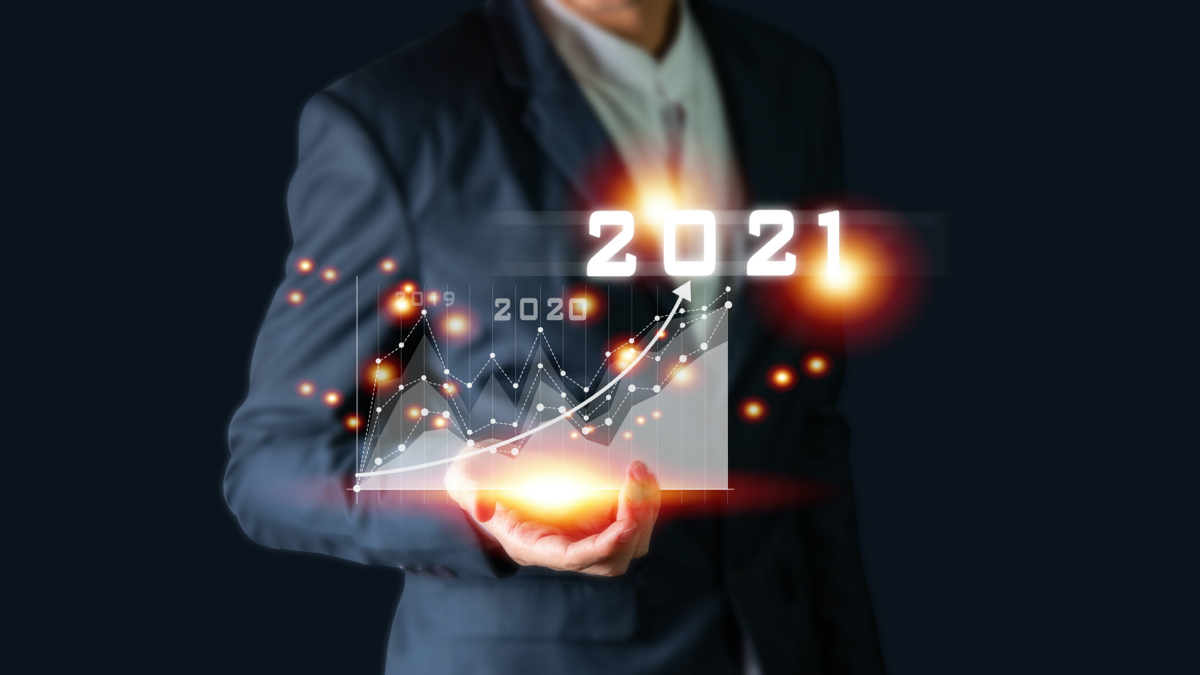 Editor’s Note: This week, we reflect on the biggest stories we’ve covered so far in 2021.  Each will likely remain a big story during the balance of the year.

The Jabs and the Jab-Nots

In major economies, public health has improved substantially this year.   Vaccinations have enabled countries to relax restrictions on commerce, travel and social gatherings.

The U.S. and the U.K. have fully inoculated almost half of their populations and are now in a summer boom.  But many countries in the developed and emerging worlds (like Japan and India), which have been slow to vaccinate their populations, are lagging and remain vulnerable to outbreaks. The world’s poorest 29 countries (a majority of which are in sub-Saharan Africa) are struggling to deal with the virus, with less than 1% of their populations even partially vaccinated.

As a result, these countries face much weaker growth prospects.  According to the World Bank’s forecasts, high-income countries, where inoculation rates have generally been improving, are set to grow at an average of 5.3% this year compared to 2.9% growth in low-income countries. 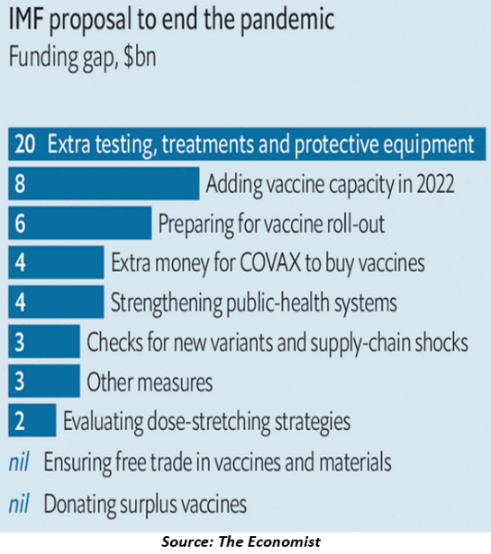 Earlier this year, Group of Seven leaders committed $4.3 billion to finance global equitable access to tests, treatments and vaccines, bringing their total commitment to $10.3 billion.  However, more will be needed.  According to International Monetary Fund (IMF) estimates, $50 billion will be required to ensure faster global vaccine rollouts.  The IMF estimates the investment will deliver a 180% return (or $9 trillion) over the next five years in economic activity, to say nothing of the lives it will save.

Speeding up production and distribution of COVID-19 vaccines will not only save lives, but will also deliver economic benefits far larger than the costs incurred.  The program will reduce the risk of viral mutation and improve the performance of global supply chains. If that isn’t a sufficient business case for the effort, we don’t know what is.

The Trump administration used tariffs and sanctions liberally against China, in an effort to correct trade imbalances that had accumulated over more than a decade.  Beijing responded in kind, making life more difficult for American farmers and firms that operate in China.

The tariff war failed to produce a more balanced trade position, and cost American firms immense amounts of money.  Escalating economic tensions produced an associated escalation in geopolitical tensions, and other nations were caught in the middle of the dispute between the two superpowers.  Some observers in both countries were hoping for a change of approach after the inauguration of U.S. President Joe Biden last January. 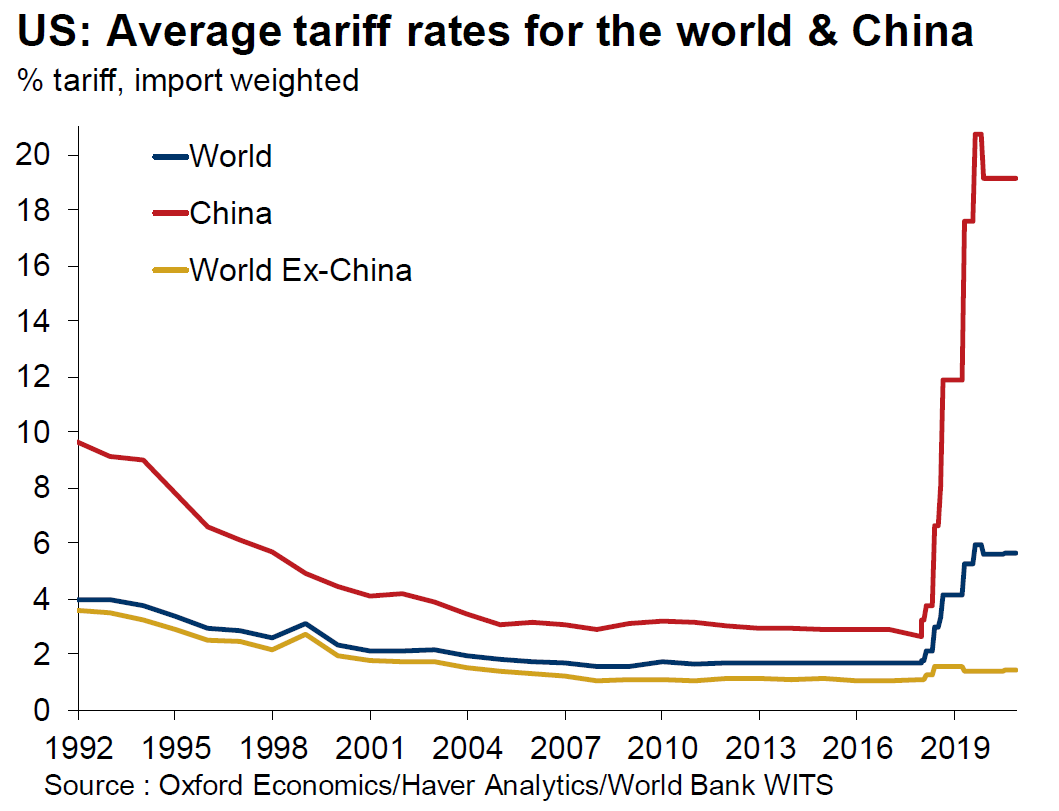 But if anything, the Biden administration has stepped up the level of economic aggression against China.  No tariffs have been lifted, and sanctions have been added.  U.S. investors have been barred from owning shares in an increasing number of Chinese companies.  American and European alignment against China has strengthened; steps to reduce reliance on Chinese production have been initiated; and measures aimed at limiting the penetration of Chinese technology have been implemented.

The U.S. is hoping this creates a measure of economic discomfort for China that will bring it back to the bargaining table with reduced leverage.  China is dealing with the cyclical challenge of pulling back on government economic support and the longer-term headwind of unfavorable demographics.  Keeping up its rapid rate of growth is becoming more challenging.

But if the pressure is having an impact, Beijing is not letting on.  Their posture continues be an aggressive one; the current struggle with Washington is viewed as a referendum on optimal economic structure and strategy.  It seems impossible to imagine China’s current leadership taking a backward step.  Frictions in the global trading system seem poised to get worse, not better.

The most frequently asked questions we receive from our colleagues and clients concern inflation.

The alarm is understandable.  Rapid, uncontrolled inflation in the 1970s and 1980s eroded wealth and led to a prolonged period of malaise.  In the U.S., inflation was cured with a harsh remedy of high interest rates.  The proposition of repeating that experience is frightening.

We have argued that most drivers of the current rate of inflation are transitory, in these ways:

The data suggest that we are probably standing at the peak of inflation. After months of gains, used car prices have leveled off in the most recent Manheim Used Vehicle Value Index.  Lumber prices have fallen from the peak seen in early May.  In these markets, we are witnessing how the best cure for high prices is high prices: there will always be a price point at which a purchase is reconsidered, and prices then fall from that peak. 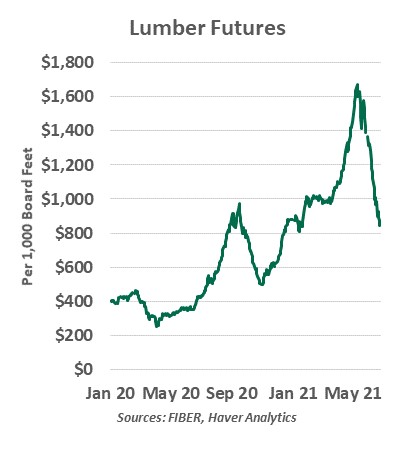 In the months ahead, we will closely watch which price increases prove transitory and which are sustained level increases that become the norm.  Fortunately, we see no cases in which prices continue rising indefinitely.  Nonetheless, we will only feel we have passed the inflation peak when client questions move on to other topics.

The pandemic has created a series of economic extremes.  Cycles of lockdowns and reopenings have put key variables on jagged trajectories.  Stimulus packages attempting to smooth outcomes have often overcorrected: indicators of activity and inflation remain distended.

Setting monetary policy in this environment has been challenging.  With current conditions difficult to discern, forecasting becomes even more hazardous.  The risk that central banks will mis-calibrate their actions remains high. 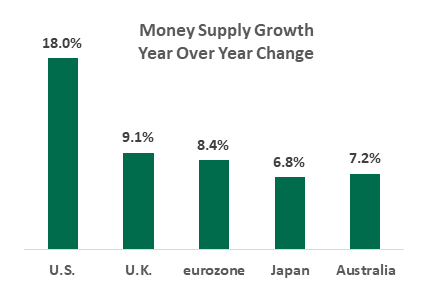 Thanks to advancing vaccination in developed markets, downside risks to major economies have faded.  But it is hard to know how pressing the upside risks might be; determining the amount of capacity that remains unused and how quickly it might be called into service is difficult at the moment.  Amid the uncertainty, the world’s central banks are pouring an immense amount of additional liquidity into markets every month.

Monetary policy in smaller countries has already started to tighten while some major central banks have signaled their intention to start moderating their generosity in the months ahead.  The U.S. Federal Reserve is slowly moving in this direction: Fed Chairman Jerome Powell recently conceded that it is “talking about talking about” tapering its asset purchases.

The Fed’s decision process is complicated.  It has doubled down on its aim to achieve broad and inclusive gains in employment, an outcome not entirely within the Fed’s control.  Fed officials have also de-emphasized forecasts in favor of realized developments as a basis of policy setting.  (Powell had the quote of the half-year: “forecasters have a lot to be humble about.”)  But since monetary policy works with long and variable lags, the risk of overshooting is present.  Staying too easy for too long may stress the prices of goods or assets.

The Fed, and other central banks, will have to communicate effectively in the second half of the year.  Achieving moderation in markets and the economy will require a measured approach—and measured tone.

Last year, the COVID-19 outbreak in China was the first disruption to the global flow of goods.  We soon learned China isn’t the only player with the potential to create bottlenecks in in global supply chains.  This year’s supply-side problems have been aggravated by outbreaks in other manufacturing hubs like Japan, South Korea and Vietnam.  Finished goods or components are produced in these markets and shipped globally to countries in the western hemisphere.  Pent-up demand on the back of broader economic reopenings has placed further pressure on supply networks. 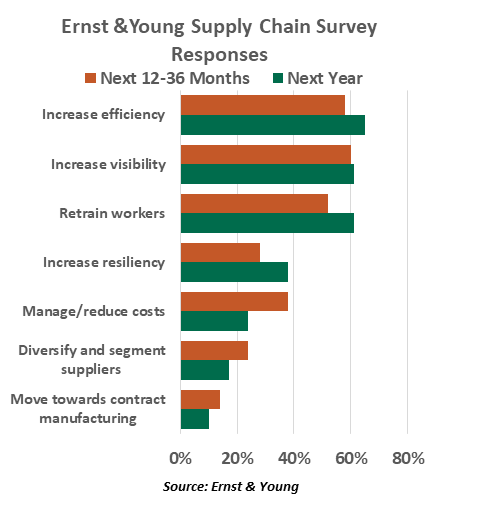 Apart from production delays, container shortages have complicated the transportation of parts and finished goods.  Idiosyncratic events—like a cargo ship running aground and blocking the Suez Canal for more than a week—have made matters worse, fueling concerns about inventories and inflation.

Clamor for the re-shoring of supplier networks is growing.  But that is unlikely to be a feasible option.  No nation is self-sufficient, and each nation enjoys a comparative advantage in producing certain types of goods.  Businesses and consumers have benefitted from globalization in the form of continuous reduction in final prices and increasing variety.

In the post-pandemic world, manufacturers will be pressured to increase their domestic production, reduce their dependence on imported sources and hold more inventory.  However, those decisions will be constrained by the need to operate efficiently and to deploy capital prudently.  We expect some reshuffling of trade patterns, but not a complete overhaul.

U.S. readers under the age of 40 have grown up with the conventional wisdom that “government is the problem,” and a small state is best.  While some among the populace were already challenging that attitude, the COVID-19 crisis has ushered in a new era of bigger government.

For many of us, the pandemic was our first experience of receiving a tangible, direct, large-scale government intervention.  Relief bills kept households afloat and helped businesses retain staff and stay solvent.  While vaccines were privately developed, the government’s fast-tracked testing, approval and distribution of vaccines made today’s rapid growth possible. 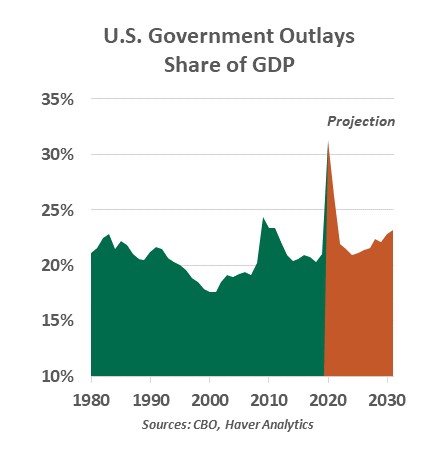 The past year of action stands out for its bipartisan nature.  The high political tensions that started the year 2020 were set aside to allow for the Senate’s unanimous passage of the $2.4 trillion CARES Act.  It was clear the nation was facing a crisis, and the government stepped up to help in a big way, even launching new initiatives like the Paycheck Protection Program.  As CARES supports expired in summer, negotiations resumed, concluding in an omnibus resolution in December, again with support of both parties.

Fortunately, the U.S. has moved past the need for relief bills.  But the spirit of expanded government involvement in the economy lives on.  President Biden announced ambitious proposals for infrastructure and family support that totaled over $4 trillion in new spending.  While the proposals are unlikely to pass in full, the ongoing debate suggests a high likelihood of some new spending passing Congress this year.

Last week, a bipartisan group of 10 senators agreed to a slimmed down framework of $579 billion of new infrastructure spending.  While less ambitious than Biden’s original plan, this continues the trend of support for larger government initiatives.

Government spending cannot be limitless.  Taken to extremes, excessive government outlays can stifle competition and crowd out productive investments, and the taxes needed to sustain it can discourage labor and investment.  The most generous proposals, like student loan debt forgiveness, have been the first to fall to the wayside.  But the end may be in sight for the era of reflexive support for smaller government and lower debt.

From base effects to bottlenecks, wages to pricing power, inflation questions abound.

Labor markets are changing course. When will the Fed do the same? India's second wave will disrupt activity elsewhere.