Workers have the upper hand, but not for long; Latin America stagflates; and Sweden provides a case study in COVID-19 response. 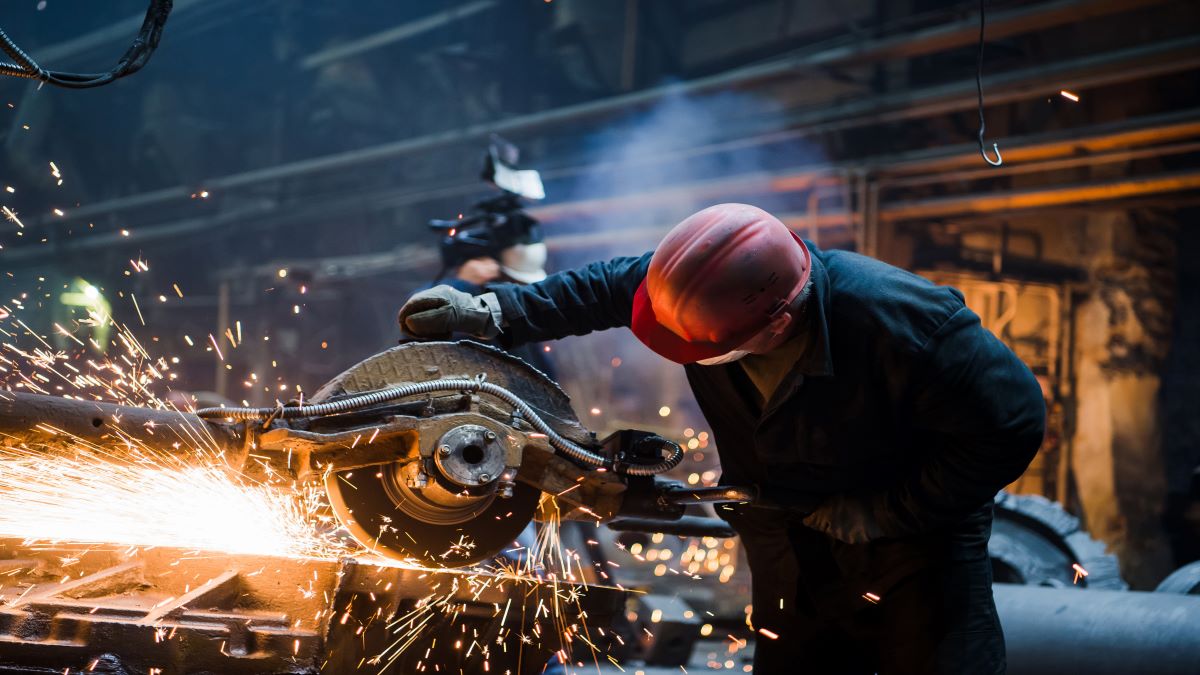 For the past two months, stories of workers gaining the upper hand over employers have filled the news. A record number of Americans quit their jobs last month for better ones, and a bidding battle for talent seems to be underway.

I sensed an opportunity. I saw that my boss was in his office at our headquarters, and for the first time in fifteen months, so was I. So I marched right down to demand a raise, threatening to take my talents elsewhere if he refused. Unfortunately, the market for economists isn’t as tight as it is for restaurant servers; I start at a local bistro next week.

Others seeking vocational advancement have had more success. Salaries and sign on bonuses have been escalating in regions and industries that are short of help. As the anecdotes accumulate, some have suggested that this summer’s hiring frenzy signals the start of a long-term trend towards increased labor leverage. But we are skeptical.

The massive, complicated effort to get people back to work as the pandemic eases was bound to encounter friction. As we wrote in a recent commentary, demand is well out in front of supply in the job market; positions are opening much faster than they can be filled. Data for June show that there are 9.3 million openings in the United States versus about 7.3 million people who have not worked since the pandemic began.

It’s a seller’s market for labor; as a result, aggregate wages have been recovering more rapidly than employment levels have. Turnover is high, making it very difficult for firms to sustain operations. 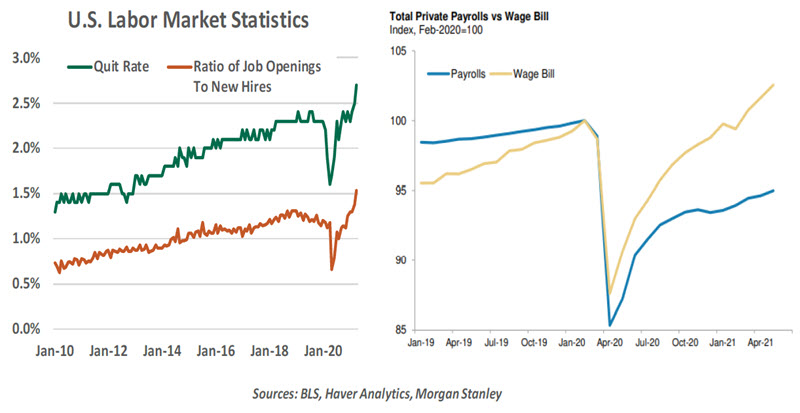 Some observers have used recent trends as the basis for predicting a new era of worker empowerment. If they are correct, companies will be forced to raise their wage bills, and potentially prices. Economic outcomes across society would become less uneven, making the recovery less “K-shaped.”  These developments would certainly encourage the Federal Reserve, which has made the quest for broad and inclusive employment gains a central objective.

Unfortunately, history suggests that the “summer of labor” will be a fleeting phase. Labor was a formidable force in the decades after World War II, as production soared. Many industries were unionized, and collective bargaining improved wages and benefits. Manufacturing workers had an avenue to the middle class, which created additional demand for the homes, cars, and appliances that they were collectively making. It seemed to be a virtuous circle.

There were, however, those who saw a downside. Money spent on labor could not be used for capital; labor rules, which stressed job preservation, often restricted the implementation of cost-saving technology. More efficient global challengers began to take market share. By 1980, heavy industry in the U.S. and Europe was in retreat.

The ascendance of Ronald Reagan in the United States and Margaret Thatcher in the United Kingdom signaled a sea change in government policy towards labor. Both took hard lines against strikes (he with air traffic controllers, she with colliers) to set a new tone. Trade policy was liberalized, opening new avenues for foreign competition.  Organized labor inexorably lost traction; unions represent about 10% of American workers today, a third of the fraction seen fifty years ago.

Relaxed anti-trust enforcement in the 1980s also allowed corporate raiders to pursue mergers and buyouts that were justified on the basis of workforce reductions and other cost cutting. Shareholders gained the upper hand, and have held it until the present day. The share of national income that is devoted to wages has declined sharply over the past 50 years. Employment in service occupations, which generally come with lower wages and less leverage for workers, is now more than 80% of private employment, fully 15% higher than it was in 1980. 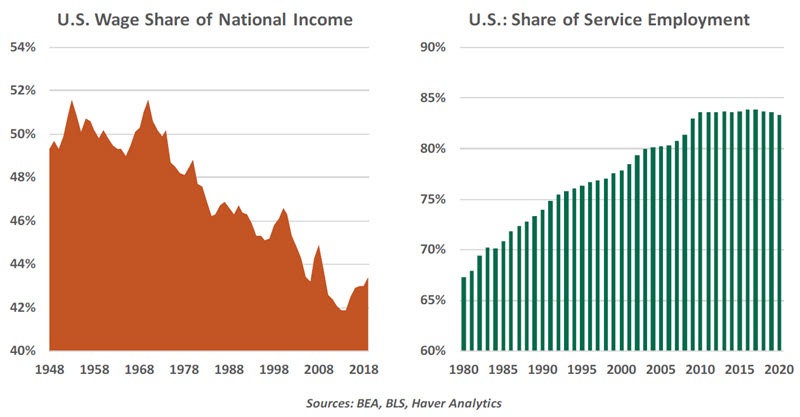 Prior to the pandemic, the United States had one of the strongest peacetime labor markets in its history, and yet wage growth was very modest. On a macro level, this suggests that firms can keep their wage bills in check even if the visible pool of available workers seems shallow.

On a micro level, the experience of e-merchants like Amazon provides an interesting window into recent wage developments. These companies were prospering before COVID-19, and gained further market share during extended periods of lockdown. Their appetite for workers is huge, and the pay and benefits they are offering are moving the entire pay scale up in some markets.

But Amazon continues to employ technology aggressively, which can serve as an ultimate check on wages. And recent efforts to unionize Amazon distribution centers have failed, leaving labor disorganized. In those situations, companies can raise wages selectively, but not always generally.

So what, if anything, has changed in the wage/profit equation? The potential loss of almost two million workers from the labor force through retirement over the past year may represent a permanent drop in labor supply, but we suspect that many of those who currently say they are retired will eventually go back to work. Some point to a more labor-friendly administration, but the thin margin held by Democrats in the Congress has limited the progressive agenda.

The pandemic has produced some of the most unusual economic patterns in U.S. history. This summer’s labor stress can be filed under that heading. But like many of other stresses we have seen in the last year and a half, we don’t expect it to last.

Embittered over my premature dismissal at the bank, and anxious to restore a feeling of empowerment, I started planning a protest at the bistro. I reached out to my new colleagues, proposing a walk out if our compensation is not improved. A server e-mailed back: the owner has already threatened to take orders by tablet if he encounters any problems with the wait staff. I better start studying the wine list…

Inflation is running hot, statistically and topically, in some advanced economies.  Central banks in those countries are considering action to address it. But in Latin America (LATAM), monetary authorities have already been forced to quell inflation, even though their economies continue to struggle. Stagflation may be setting in at difficult time for the region.

Latin America has been underperforming for several years vis-à-vis other emerging markets. Even its best years, from 2003 to 2013, saw growth fueled by a China-led commodity boom. While the recent rise in commodity prices has helped the region, those prices remain well below the levels needed to secure economic prosperity for Latin producers.

Latin America has been among the areas most deeply affected by COVID-19 economically and socially. Global gross domestic product contracted by 3% in 2020 compared to a 6.8% decline in the region’s output. Jobs in LATAM are heavily concentrated in contact-intensive sectors like restaurants, shops or public transport, which account for 43% of total employment.  With the pandemic wreaking havoc on these sectors, Latin Americans worked 16% fewer hours in 2020, almost twice the global loss.

Latin monetary authorities eased policy considerably last year to deal with the initial disinflationary risk from the COVID-19 shock.   But a combination of economic recovery, supply chain disruptions, and weaker currencies has led to a sharp rise in inflation across the region. Against this backdrop, the Central Bank of Brazil raised rates in March and will likely continue to tighten through the remainder of the year.  Mexico’s Banxico surprised with an early rate lift-off in June. Colombian and Chilean central banks are likely to follow suit.

Recovery is far from complete across the region. COVID-19 infections remain relatively high; a slow start to vaccinations and reliance on the less effective vaccines has allowed the virus to sustain itself.

With the exception of Brazil, the scale and design of government support during the pandemic has been insufficient to offset the economic pain. Fiscal responses in LATAM have been more generous this time than in the past, but they still parsimonious relative to other emerging markets.  Large amounts of resources were deployed to boost healthcare systems, with little room left for income support measures. Lower tax receipts, currency depreciation and economic relief measures have all led to higher public deficits and indebtedness. In all, more than $80 billion of Latin American bonds have been restructured since the pandemic began. As a result, the region’s governments are under pressure to improve or least stabilize deteriorated fiscal positions through tax increases or spending cuts.

With pandemic still raging and social conditions fragile, either of these options will be hard to implement.  The politics surrounding them are perilous; voters will go to the polls in Argentina this year, and Brazil next year. Incumbents will not want to run on platforms of austerity. Nonetheless, the balance between fiscal sustainability and a fiscal cliff of spending reduction will define the long-term trajectory of LATAM economies.

The pandemic and the related disruptions might fade over the coming quarters, but the scarring the virus will leave on Latin Americans will take a long time to heal.

A year ago, as the first COVID-19 wave passed and restrictions were loosened, many lockdown skeptics pointed to Sweden as a nation that stayed open through the pandemic with minimal risk to public health. But in retrospect, Sweden’s effort to maintaining normalcy came at a high cost.

Amid the pandemic panic of spring 2020, Sweden’s schools and businesses remained open. Masks were not required by the government. While entry to the country was restricted and large gatherings were discouraged, life in Sweden carried on fairly normally.

Proponents of the lighter lockdown note that Sweden’s excess death rate stayed low, meaning fewer patients died from delaying medical care for other ailments. It can also be argued that maintaining quality of life had intangible benefits. But relative to its Nordic peers, Sweden ultimately had higher rates of COVID-19 infections and fatalities. And Sweden experienced a second round of infections in the early months of 2021 that most of its neighbors escaped.

Despite its efforts to remain open, Sweden still experienced a deep recession in 2020, with a 9% loss of gross domestic product and a three-percentage point increase in unemployment at its peak. Sweden’s downturn was similarly severe and long-lasting as its peers. 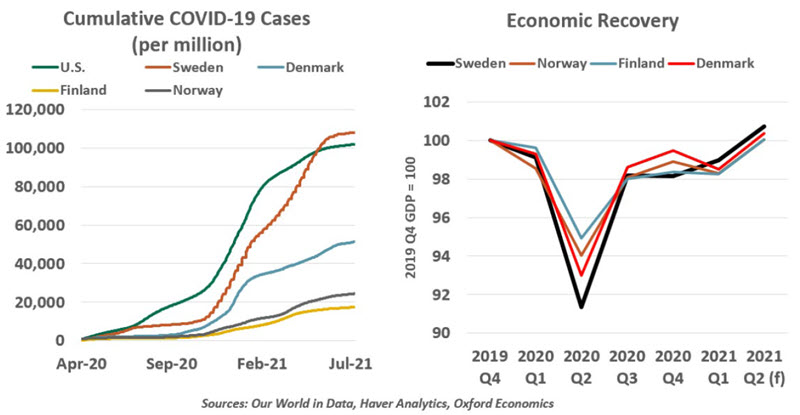 None of this is meant to deride Sweden. The virus was novel, and the right course of action was not obvious. Readers in the U.S. will recognize the calls to reopen, set aside restrictions and let people decide the right course of action for themselves. According to the Oxford Lockdown Stringency Index, much of the U.S. was as permissive as Sweden, with similar outcomes. But the Swedish experience does highlight that limited lockdowns yield limited results. Loose restrictions are mere inconveniences, not effective public health policies.

The best approach to normalcy is through vaccination. Here, Sweden is performing in line with most other European nations, and its prospects for the remainder of the year are bright. While we hope lockdowns will stay in the past, Sweden’s experience is a helpful case study for understanding the risks of a lighter approach.