From base effects to bottlenecks, wages to pricing power, inflation questions abound. 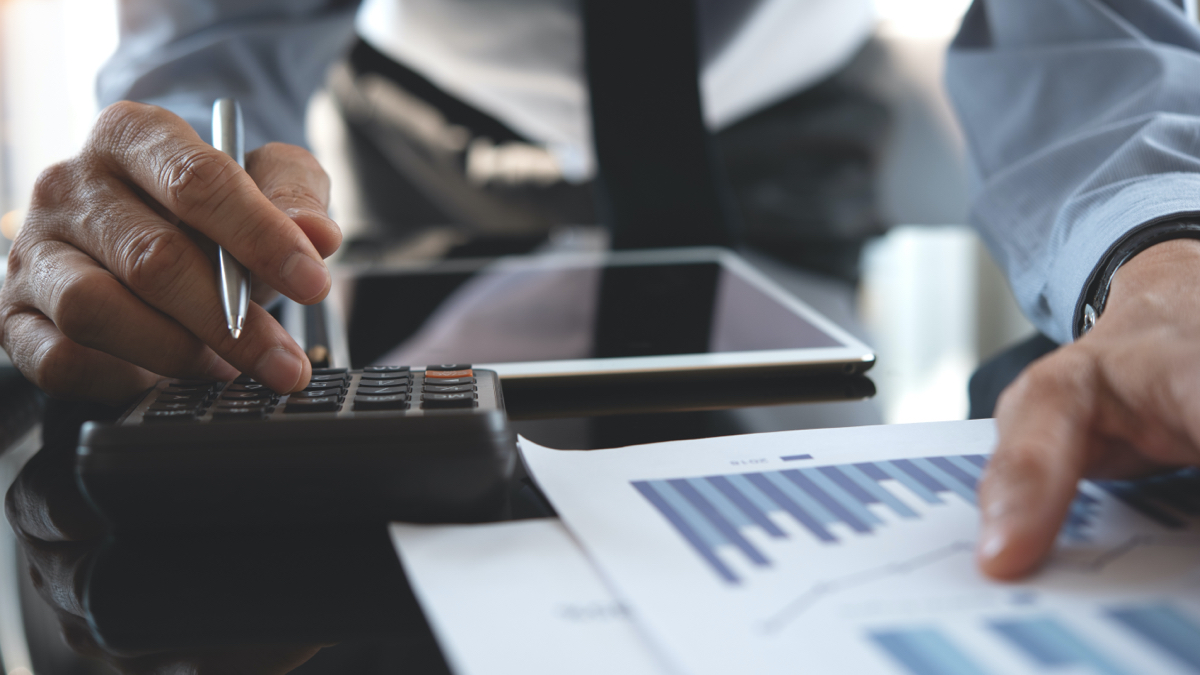 This week, our local grocery store began offering customers a free bottle of hand sanitizer with every $5 purchase. What a difference a year makes; a year ago, panicked shoppers were ransacking store shelves in pursuit of that same item.

That experience got me thinking about how inflation evolves during periods of stress. In the case of hand sanitizer, anxiety initially created shortages and hyperinflation; as time passed, oversupply caused the price to crash. The opposite was true for hotel rates. We are currently seeing these kinds of roller coaster rides in the prices of many different goods, making it difficult to get a fix on their long-term trajectories.

Given the frequency and intensity of recent discussions around American inflation, we are devoting this week’s commentary to examining the issue from a number of angles. Our conclusion remains that many of the signs of inflation in the current data are fleeting. While inflation risk is growing, it is manageable.

Inflation in the U.S. has been in persistent decline since the early 1980s. It has remained in retreat through three of the longest economic expansions in history and periods of low unemployment.

A lack of control over the money supply was cited as the root cause of the very high inflation experienced in the late 1970s and early 1980s, and regaining that control was hailed as the main factor in bringing inflation to heel. But studies have suggested that the Federal Reserve’s renewed restraint, while important, was not the only contributing factor. 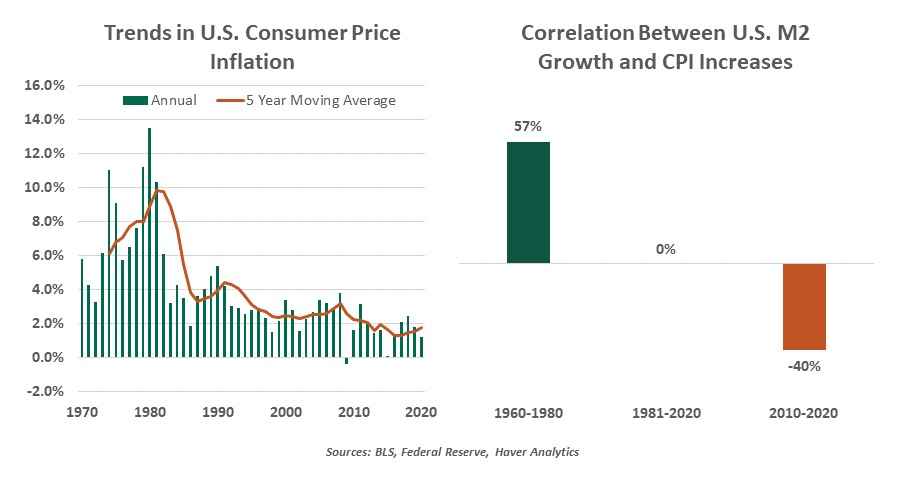 Over time, the statistical link between money and inflation has weakened. As shown in the chart above, the sign on the relationship has actually reversed in the last decade. This suggests that secular, rather than cyclical, factors have been the key drivers of inflation developments in recent years. A similar fate has befallen the Phillips Curve, which no longer describes the relationship between employment, wages and inflation.

The identities that have been used to describe how inflation evolves are no longer very helpful. Forecasting inflation now feels like flying through a cloud, not really knowing where the horizon is.

There is a wide range of inflation indicators available; each has its own approach to collecting prices, weighting them, and adjusting for aberrations. All are higher than they were earlier in the year, but to varying degrees.

All are being stretched at present by pandemic-induced “base effects,” which should peak next month. (Base effects occur when extreme months fall out of the year-over-year comparison often used to gauge inflation.) Their influence will reverse as the year progresses; as they do, their impact on the year-over-year change in the consumer price index (CPI) will recede by almost 2%.

The biggest categories in the consumer price index are shelter and medical care. The costs of both of these essential services are 1.5% to 2% above last year; nothing to be overly alarmed about. House prices are not part of the CPI, but they can influence rental rates; the current strength of the housing market may eventually lift inflation, but modestly.

The prices of a handful of goods and services are under unusual stress because of bottlenecks in supply. Motor fuel prices rocketed upward when hackers closed a key pipeline. With new car production slowed by chip shortages, prices of used cars have jumped; the rapid resumption in travel has caught car rental companies with thin fleets. Sawmills are running at full capacity but have not kept pace with the housing boom, raising the price of lumber and products made with it. Hotel rooms are readily available, but workers to maintain them are not (at least for now).

None of these situations has a significant weight in the calculation of the CPI, and supply should rise to meet demand in each case. The “trimmed mean” CPI, which removes the influence of these unusual bursts, stands quite a bit below the “headline” CPI. 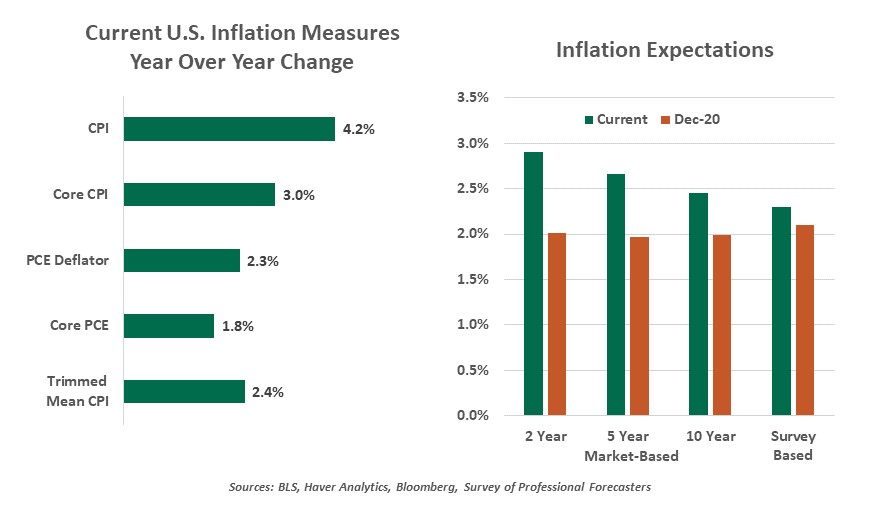 Nonetheless, stories about price bursts have enjoyed an outsized presence in recent headlines. With inflation, perception can become reality, so these isolated incidents could have an outsized impact on inflation expectations.

Readings on expectations are not overly alarming. Both market-based and survey-based indicators are higher than they were six months ago, but neither is above the Fed’s comfort zone. Expectations for longer terms are below those for shorter terms, which suggests the markets are looking past temporary post-pandemic stresses.

Our thesis is that the isolated stress currently being experienced will work itself out over time, and not add substantially to long-term inflation. But the following factors will have an important influence on inflation over the next five years, and bear close watching.

a) By some measures, globalization was already retreating prior to the pandemic. Further retreat is possible as countries try to reduce their exposure to extended supply lines. This has the potential to make some goods somewhat more expensive.

b) Investment in technology is rising rapidly in the wake of the pandemic. The resulting enhancements to productivity and e-commerce will be disinflationary.

c) Aging demographics have a mixed effect on inflation: slower growth in the labor force and productivity could push inflation higher, but retired consumers are more frugal.

d) Confidence in restrained inflation rests partly on the Fed’s willingness to act if prices eventually rise too quickly. But this is the most dovish Fed in decades, and policy may be slow to react if a threat arises.

With a considerable reserve still on hand at home, I declined the offer of hand sanitizer at the grocery store. But it wasn’t entirely worthless; seeing the surplus reminded me not to overreact to temporary price shocks. Maintaining that perspective will be important in the months ahead.

Commodity prices and supply chain disruptions are grabbing the limelight amid rising concerns about inflationary pressures in the U.S. But wage dynamics deserve more attention. Labor is the primary driver of the cost of services, which accounts for over two-thirds of the U.S. economy and about half of the consumer price basket. In a services economy like the U.S., price pressures come from the labor market, not the lumber market.

With the U.S. economy reopening, job openings are already 5.3% above their pre-pandemic level. But finding labor is becoming increasingly difficult amid lingering concerns about safety and child care; enhanced unemployment benefits are set to last through August in most states.

Anecdotes of increases in wages and other forms of compensation are multiplying. Rising local minimum wage policies have also applied upward pressure. Year-over-year readings on compensation have been hitting unusual peaks: the Bureau of Labor Statistics’ Employment Cost Index rose at an annual pace of 4% in the most recent quarter, and average hourly earnings have risen at rates of more than 5% in recent months. 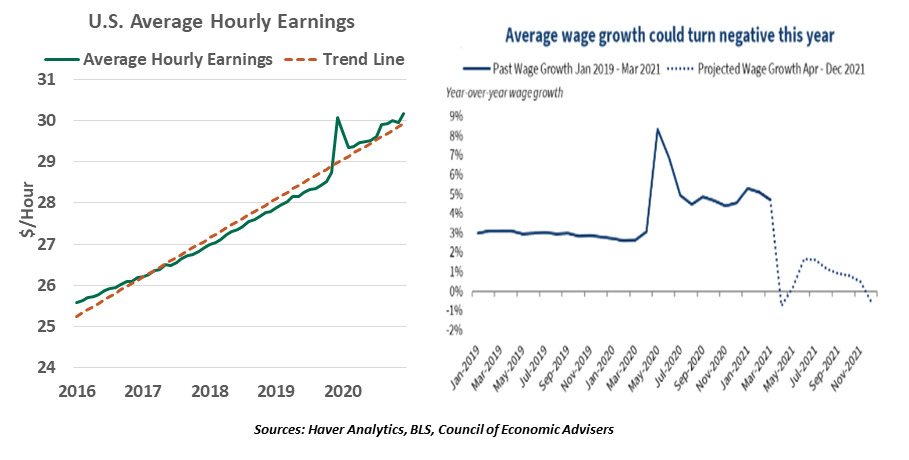 However, both of these readings are somewhat misleading. As described in a paper from the Council of Economic Advisers (CEA), more workers with low and rigid wages lost their jobs during the pandemic, creating an upward distortion in aggregate measures of labor costs. Demand for these workers is already rising, and an improving public health situation will normalize labor supply through the summer. More school districts are announcing resumption of in-person classes in the fall, which should allow parents to work more.

As these employees return to the labor force, the employment mix should return to normal. The need to offer higher wages and other inducements to lure applicants will fade. As shown in the chart above, the CEA estimates that aggregate wage growth could turn negative this year.

So while help wanted signs and headlines suggest wages are heading sharply higher, pay raises should remain well-behaved over the longer term. And that bodes well for containing inflation.

While meant to poke fun at their more frustrating customers, the joke reveals mechanics’ understanding of pricing power. The more their services are needed, the more they can charge.

Prices will be closely scrutinized in coming months as we gauge the extent of inflation. Businesses work to optimize their prices, assessing supply and demand and charging as much as their customers are willing to pay. Competition from other firms keeps their price increases in check.

Supply and demand conditions for many products are deeply distorted at the moment. Today’s extraordinary circumstances have created a unique opportunity for sellers to raise prices:  consumers have benefitted from stimulus payments and are inclined to spend; supply, by contrast, has been slower to respond. As a consequence, surveys show that pricing power has been increasing in some areas.

The ability of merchants to raise prices is a function of the elasticity of customers’ demand. Sectors selling essential goods and services for which there are no substitutes have more leverage. For example, food and energy are essential to everyday life; in these areas, higher input prices lead directly to higher final prices. Elasticity can vary over time: While leisure travel is certainly not essential in most instances, the notable price increases for hotel rooms in the April consumer price index suggest many consumers feel an imperative to travel after a year of virtual house arrest.

Pricing pressure can be felt at every point in a value chain. Indices of producer prices and surveys of manufacturers’ input costs are also elevated. While some larger firms can hedge their costs, producers with large exposures to commodities or labor will feel margin compression and will try to pass their higher costs through to final prices. Investors are on edge: the financial data company FactSet found a record number of companies mentioned “inflation” in their first quarter earnings calls with analysts.

But whether a necessary pass-through of input costs or an opportunistic chance to goose firms’ margins, these circumstances will not persist. Today’s price shifts are one-time, not ongoing. Consumers will continue to demand the best deals; if we encounter a price too high, there is plenty of hand sanitizer available to help wash our hands of it.

Labor markets are changing course. When will the Fed do the same? India's second wave will disrupt activity elsewhere.