The U.S. Congress faces major financial deadlines in the month ahead. 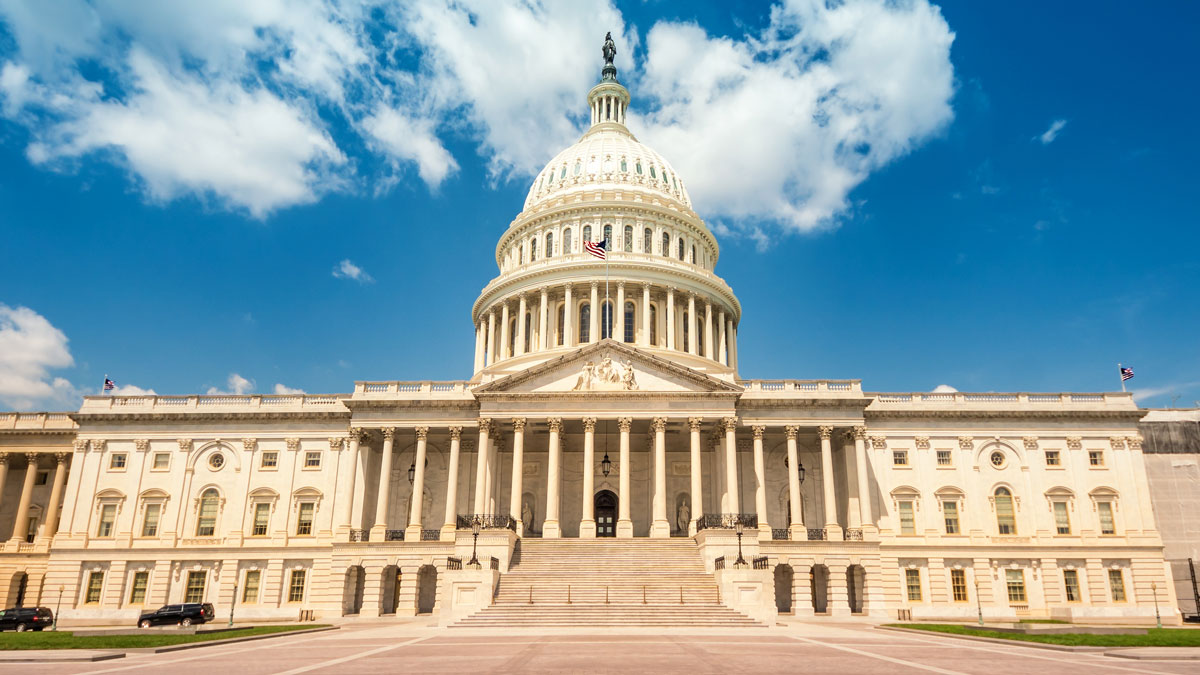 Around this time last year, we focused our weekly commentaries on the economic issues surrounding the 2020 U.S. presidential election, starting with a review of the fiscal outlook. Whoever won, we suspected that the first year of the presidential term would be a challenging one, financially. We were correct: and now, several major fiscal issues are coming to a head at once. The next month will be a critical time in Washington.

As of this summer, the debt ceiling went back into force after a two-year suspension. This policy limits the U.S. Treasury Department’s ability to issue debt; in the extreme, running up against the ceiling could create a severe cash crunch that could lead to a debt default. We have expressed our skepticism of the ceiling: a measure meant to simplify Treasury operations unintentionally became a cudgel with the potential to cause a crisis. The latest warning from the Treasury is that it will run out of cash in October. Markets have been sanguine thus far, as the limit has always been raised before serious economic harm is done. While we expect the limit to increase again, we do not encourage playing with fire. 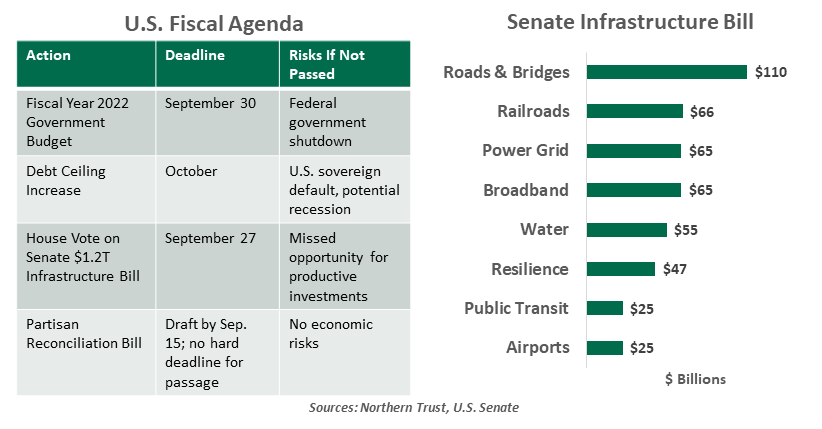 The U.S. fiscal year ends September 30. Without a 2022 budget bill, the government will shut down. Congress can pass continuing resolutions to temporarily carry forward the prior year’s budget, but this just kicks a very big can down the road.

Shutdowns as budget negotiations drag on are not unusual, but they are disruptive to Federal functions and employees. They carry enough negative consequences that they should be avoided whenever possible.

In August, the Senate (but not yet the House) passed a $1.2 trillion bill that allots $550 billion for new infrastructure spending. This bill covers items with broad popularity, including maintaining roads and bridges and investing in broadband and electrical networks. These projects will bring widespread benefits to all Americans, and recent natural disasters have helped make the case for more investments in resiliency. And starting some longer-term investment programs now will help limit some of the fiscal drag that might result from the end of COVID-19 emergency spending.

With the most broadly popular portions of the Biden agenda advancing in their own bill, the more partisan priorities are the substance of a large spending proposal which will have to be passed through reconciliation.

This bill has been long in the making. As the Democratic party reached a 50-50 tie in the Senate, it became clear that sweeping legislation that could reach the 60-vote filibuster threshold would be rare. Once per year, for fiscal measures, a reconciliation bill can be passed with a simple majority and no opportunity for a filibuster. (The 2017 tax cut legislation was passed in this manner.) After much anticipation, the time for that bill has arrived.

The Democrats are not throwing away their shot. The reconciliation instructions passed in the House (but not the Senate) in August authorize up to $3.5 trillion in spending for a wide range of social welfare priorities, including health care, affordable housing, universal pre-kindergarten and free community college. 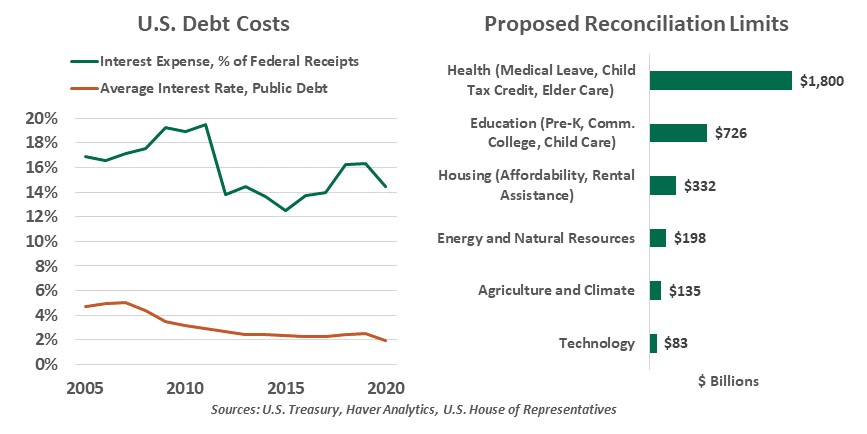 The final legislation is sure to fall short of $3.5 trillion. Moderates within the Democratic party are airing concerns about the size of the bill and speed at which it is moving. Debates often focus on the headline sum without elaboration of which programs are beneficial or should be set aside. Legislators are now working to determine those priorities.

Even the full $3.5 trillion spending plan would not entail $3.5 trillion of new debt. President Biden gave guidance that new spending should be “fully offset,” meaning some combination of new taxes, tax reforms, and cuts to other spending programs. While a worthy goal, it does require some optimistic mathematics. Biden’s commitment to not raising taxes on small businesses, family farms and households earning less than $400,000 leaves very few targets. Corporate tax increases will be met with legitimate concerns about America’s competitive position for international businesses.

Some new debt would not harm the nation, especially if it is spent on productive investments in physical and human capital. Interest rates on long-term bonds are holding at very low levels, and as long as the debt ceiling is raised, there is no question that the U.S. can afford to service its debt. In 2020, the U.S. spent nearly $500 billion on interest payments, representing about 15% of federal government revenue; this is lower than it was a decade ago. The national debt has trended upward for decades without triggering financial pressure. However, especially as entitlement costs rise, fiscal crowding will become a greater concern.

Beyond specific measures, this month’s fiscal legislation will be a test of an evolving conventional wisdom in Washington. The massive (and successful) spending in response to the COVID-19 crisis suggested an end to the bias toward austerity and the beginning of an era of wider support for a larger role of the government. Now, reckoning with real bills that represent real changes (and real spending), expansion of government is far from assured.

The reconciliation bill also presents an opportunity to get other business done. Democrats would prefer to raise the debt limit with bipartisan approval, but are unlikely to find much Republican support for additional spending. Better to raise the debt ceiling alone than risk default.

The sheer volume of major legislation will make for difficult progress. The Senate returns to session on Monday, September 13, and the House a full week later. Beyond the content of the bills, many legislators have different preferences as to sequencing votes, which is part of the reason the infrastructure bill is stalled in the House.

Political and economic risks of inaction are growing by the day. The two parties don’t agree on much these days, but defaults, shutdowns and stasis would be bipartisan problems.

China’s Debts Are Coming Due

China's Debts Are Coming Due

Evergrande is an example of the risk of debt defaults to China's financial stability.