Keep up with how the latest headlines moved markets, and what’s up next.
SUBSCRIBE NOW
February 13, 2022
PRINT

Uncertainty is in the spotlight, and it's brought an unwelcome friend – volatility. Find out what that means for our outlook.

After a fairly placid 2021 for equity markets, volatility has been on the rise due to the usual suspect: uncertainty. As shown below, we have typically experienced a 10% correction every 34 weeks. We have now gone 95 weeks since the last one. The rise in uncertainty is mostly tied to surging inflation — which has been an issue the markets handled with relative equanimity in 2021. Maybe this is like the old story about boiling the frog — and the water has now gotten to the boil. In December, we hardened our inflation risk case around inflation from a Fed overreaction to Fed hawkishness justified by persistent inflation — and the recent U.S. headline Consumer Price Index print of 7.5% bolsters this case. We now expect three hikes by mid-year at which point the outlook becomes a bit cloudier. We do not expect the Fed will accomplish the six hikes currently priced in by the markets.

We’ve regularly discussed the historical performance of key asset classes during the first year of Fed rate hike cycles. While history shows a fairly persistent trend of positive performance, there is a pattern of softness in the early months of the campaign. This episode is likely being influenced by the strongest inflation in decades, with inconclusive evidence of coming relief in the supply bottlenecks that have boosted goods prices. We expect this to start coming through by mid-year, which will be necessary to offset the potential of continuing strength in labor and housing markets. Improvement in West Coast shipping wait times and comments from ocean shipping companies are hopeful but could prove premature.

We continue to focus more on the implications of inflation than just on the level of overall prices. Corporate pricing power remains strong, offsetting increased costs and buttressing profit margins, earnings and stock prices.  Bond markets have had a difficult month since the Fed pivot, but the 10-year Treasury yield of ~1.8% remains well-behaved and within our expected range of 1.5—2.0%. We think the Fed’s accelerated timetable around tapering its asset purchases, and then the potential for shrinking its balance sheet (see our discussion in the interest rate section) will be executed with a close eye on the impact on fixed income markets. With nominal rates still low overall, we continue to underweight fixed income and favor risk assets in our global policy model. We expect developed markets to outperform emerging markets again in 2022, and we continue to favor high yield bonds over investment grade bonds due to their lesser interest rate sensitivity. Finally, global natural resources remains a favored asset class as a play on economic growth and constrained supply, and as a hedge against continued high inflation.

As investors, our job is to position portfolios for the economic environment we see unfolding while also seeking to meet client goals. So, what asset classes perform well during inflationary periods? Performance in 2021 gives some clues, with developed market equities, natural resources, real estate, high yield and TIPS all good performers. Conversely, investment grade and emerging market bonds struggled. Because we don’t expect the Fed hiking campaign to derail what we think is a mid-cycle expansion, we still like economic sensitivity and favor developed market equities, natural resources and high yield bonds. Volatility is likely to remain high as solving the supply and demand imbalances causing high inflation won’t be immediate. Inflation expectations in the market have been reasonably well behaved — as the expected inflation rate over the next five years remains below 3%.  Other global risks, like Ukraine-Russia geopolitical developments, remain on watch but are too unpredictable to warrant action in portfolios. Thankfully, the increasing relaxation of COVID policies globally further reduces the economic risk around the pandemic and provides further runway for the complete reopening of the global economy.

While yield curves generally slope upwards, they are always in a constant state of flux. Coming out of economic downturns, back-end yields typically rise first as the yield curve incorporates better growth prospects and higher rate hikes in the future. Once a tightening cycle begins, front-end rates tend to rise more than back-end rates (referred to as “bear flattening”). Currently, the 5s/10s curve (the difference between 10- and 5-year Treasury yields) is flat on a historical basis — especially given the tightening cycle has not yet started (see chart). Normally, curve flattening occurs after the hiking cycle ends — or at least is close to the end.

Curve flatness indicates investors expect tighter monetary policy, and do not anticipate a shift to multi-year above-channel growth and inflation. While a 5s/10s inversion would not necessarily signal a recession, it would likely indicate that the market thinks the Fed might overtighten and therefore constrain growth. All of this matters in the context of the speed and ending point of the tightening cycle. We expect the Fed will jump at the opportunity to hike rates at its March meeting (including the possibility of a bigger-than-normal 0.5% hike), but the 5s/10s suggests policy should remain dovish by historical standards. 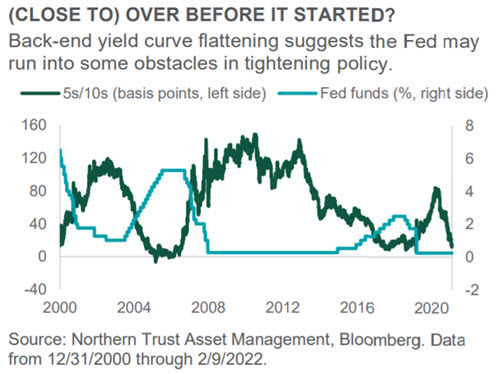 The recent increase in interest rates has caused investor concern over the impact of rising rates on the high yield market. High yield is favorably positioned relative to the majority of fixed income during periods of rising rates due to its relatively lower duration and strong income yield. Within high yield, the impact of rising rates differs between ratings. Over the past month, BBs returned a negative ~3%, while Bs and CCCs each declined a lesser ~2%. Lower quality outperformance was helped by its shorter duration relative to the broader market (especially relative to higher quality), as well as the fact that fundamentals remain robust and default expectations are low. 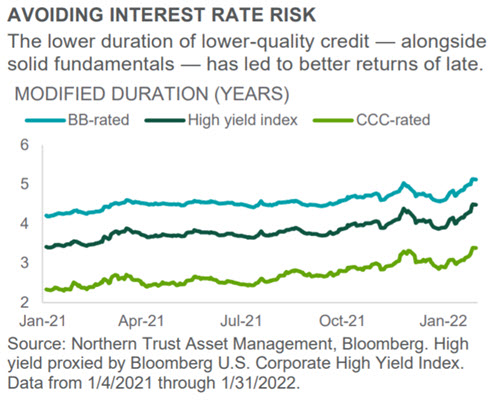 Global equities lost ground over the past 30 days, as concerns over elevated inflation and a hawkish shift in monetary policy across the developed world took its toll. By the end of January, global equities were down 4.9% on the year, with the intra-month maximum drawdown reaching 7.9%. Robust corporate earnings were a key driver for the market to claw back some of its losses, in line with our long-held view that earnings will remain resilient in the face of elevated inflation and a moderation in economic growth.

In terms of regional performance, the U.S. suffered from its higher exposure to growth sectors while other developed markets and emerging markets outperformed. To highlight once again how regional performance is impacted by differing growth-versus-value exposures, it is noteworthy that the Russell 1000 Value index performed roughly in line with the developed ex-U.S. index. Emerging markets benefited from some easing of concerns regarding the regulatory outlook in China and the political outlook in Brazil. However, despite some signs that China’s government is increasing fiscal and monetary policy support, we maintain a preference for developed markets while we evaluate the extent to which China policy support will actually improve the outlook for its economy. 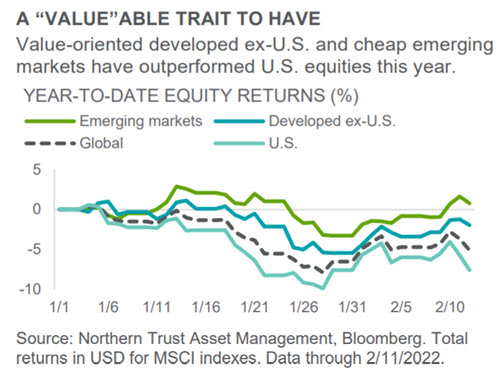 The natural resources asset class (NR) — and our tactical overweight therein —has acted as a true ballast in our global policy model recently. Since our December investment committee meeting (December 1 through February 11), NR has returned 17.9% versus -1.0% and -3.8% for global stocks (MSCI ACWI) and investment grade bonds (Bloomberg U.S. Aggregate), respectively. Its allocation in the portfolio has kept tactical performance in line with the strategic benchmark, despite our overweight risk positioning. But the question is always what’s next.

Two things may be troubling natural resources investors as we look out over the next year: the Fed and the dollar. As the Fed pivots to tighter (but not tight) monetary policy — while the ECB remains more dovish — there is some risk that the dollar strengthens. Many assume those two factors will represent a headwind to returns. We know what they say about assumptions. The reality is that natural resources have had the best returns of all major risk assets over the first year of the last four rate hike cycles — an average (and fairly uniform) return of 25%. Further, the negative correlation to the dollar isn’t what it once was — both in absolute and relative-to-global-equity return terms (see chart). We maintain our tactical overweight. 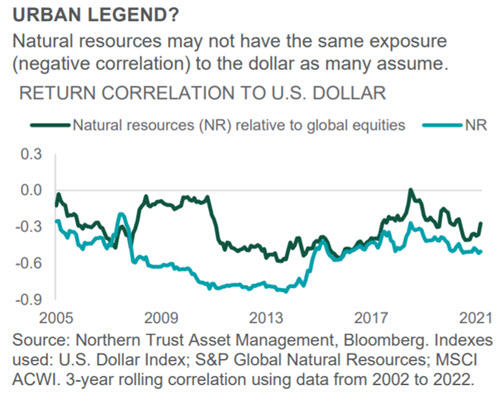 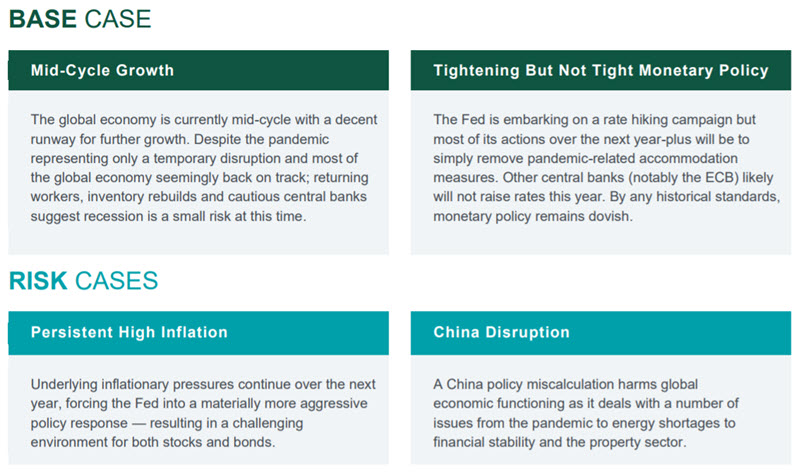