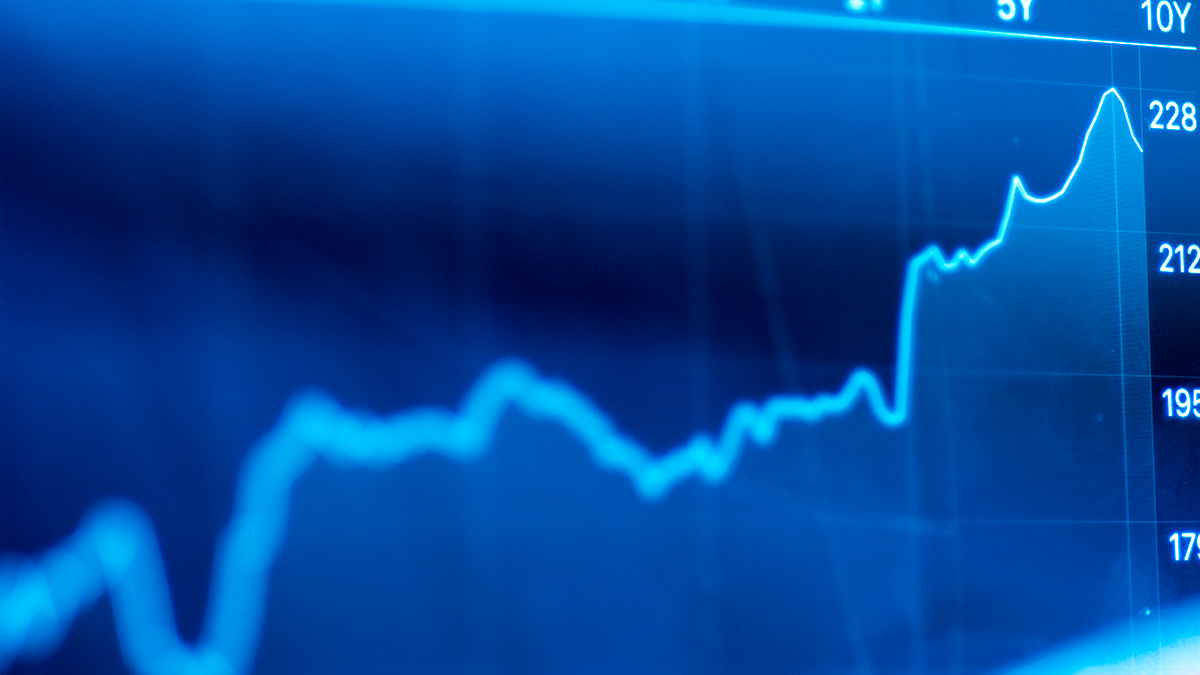 I do not envy meteorologists. They must make regular, precise, public pronouncements of the future. They are often wrong due to forces well beyond their control. Day by day, their job is difficult, but over a span of months, trends are easier to predict. Right now, those of us in the northern hemisphere are dealing with winter, but we can be certain the weather will be warmer six months from now.

Forecasting interest rates this year feels much like meteorology. We know what’s coming next: rates will rise. But how many hikes will central banks make, and at what level will the cycle end?  To set long-range expectations, policymakers rely on their estimates of the neutral rate, a measure that can be difficult to pin down.

The neutral rate is the point at which monetary policy is neither accommodative nor restrictive. Also known as r*, the neutral rate is a target that cannot be known with certainty. It is of a family of inexact target outcomes like natural unemployment or potential growth. They vary country by country and evolve over time. In a 2018 speech, Fed Chair Jerome Powell built on the idea of “r star” to make an apt analogy to celestial navigation. The stars cannot pinpoint a destination, but they gave explorers some confidence in deciding which direction to turn.

Researchers have attempted to create rules that inform monetary policy decisions. For example, the Taylor Rule provides a calculation that relates current inflation and economic growth, relative to their targets, to derive a Fed Funds rate. High inflation and above-trend growth push up the target rate. Other frameworks like the inertial rule and first-difference rule use similar logic but with amendments to slow the rate of changes or compensate for uncertain target rates. No single rule dictates central banks’ decisions, but they help to put inflation and growth figures into context.

COVID-19 rendered these rules nearly useless. The slowdown and recovery in 2020 exceeded any precedents that were used to develop rate models. Taylor Rule estimates of the appropriate Fed Funds rate fell deeply negative in the downturn and now stand over 8% amid elevated inflation; both extremes are far beyond any plausible policy path. The New York Fed discontinued its estimates of r* in 2020 and still have not resumed. 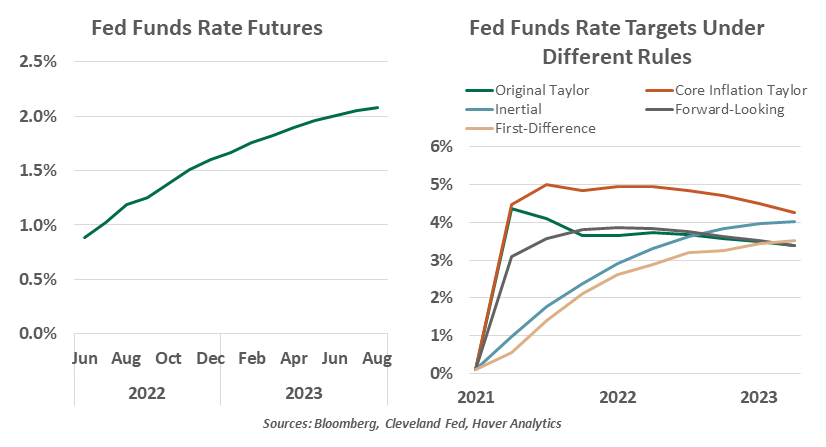 An economy has found its neutral rate when it is at equilibrium: With full employment and stable prices, demand aligns with supply, and savings and investment grow at steady rates. Many of these relationships are out of balance, and whether they return to old norms will determine the neutral rate going forward.

The most immediate concern is inflation: Prices are increasing at rates not seen in decades and far beyond any central bank’s target. The Bank of England already answered the call in November and again in February, raising its policy rate by 40 basis points, with more likely to follow. The Fed has unambiguously signaled that a series of rate hikes will begin with their March meeting.

If inflation endures above target, central banks will need to cool the economy with above-neutral rates. Speculation about rate actions would then take a multiple-step approach: First, how high rates must rise to halt inflation, and then, how far they should fall to support sustainable growth. Some Fed governors suggested such a path on the December dot plot, with rates forecast higher in 2024 than the prevailing estimate of long-run rates.

Supply and demand are out of equilibrium, with elevated demand and supply shortages forming a dominant narrative of 2021. Production delays have likely peaked, and the return to inventory accumulation sets the stage for restoring balance.

COVID-19’s disruptions will pass, and with luck, no new crisis will take its place. The day may one day arrive that policymakers must reconsider structural factors to set the appropriate interest rate.

Savings have been elevated for a long time. Former Fed Chair Ben Bernanke observed a “global savings glut” in 2005, and stocks of savings have only increased since. Some of this is demographic: Aging populations slow their consumption as they prepare for retirement. Some is strategic, as central banks and national treasuries accumulated large foreign exchange reserves. Savings provide stability but are an unproductive use of money; more saving lowers the neutral rate. While saving patterns were temporarily altered in the pandemic, it is hard to expect the crisis has caused a permanent shift in saving behavior. 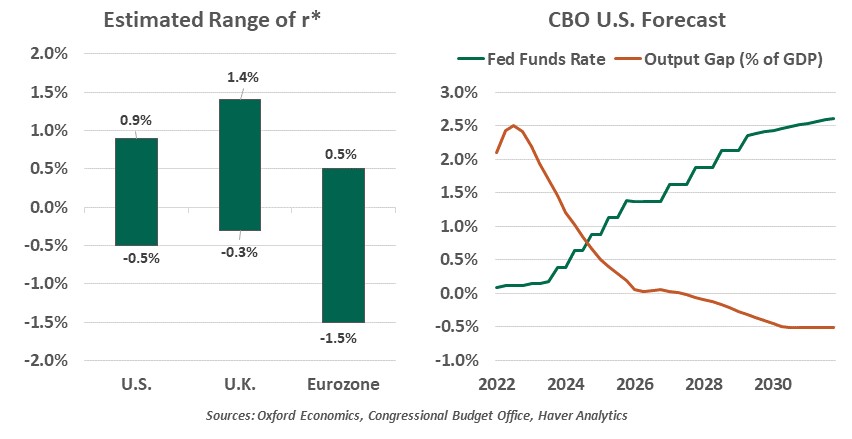 Greater investment, meanwhile, can unlock economic activity that can prop up the neutral rate. Despite supply chain challenges, capital investment has not taken off in a way that suggests productive capacity will grow. However, investments in the green economy to address climate risks could be tremendous, and may require new levels of investment that will push up the neutral rate.

Long-run projections, such as those of the U.S. Congressional Budget Office, expect a structural output gap to become the norm over the long term. The gap indicates economic growth holding below its potential—and potential growth itself is a measure requiring a lot of forward-looking assumptions. The cycle becomes self-propagating: A lack of attractive investment opportunities encourages more marginal saving, which precludes further growth-enhancing investments. Based on past activity, these cautious assumptions are defensible, but a new normal of higher inflation and greater investment could shock the economy away from gradual stagnation.

With so many uncertain drivers, estimates of r* fall into ranges, with Oxford Economics estimating the inflation-adjusted rate may even be negative in major economies. Forthcoming rate adjustments will need careful consideration. An incorrect weather forecast carries little risk beyond altering a day’s plans or wardrobe. A rate forecast that causes a central bank error is a much larger risk. We trust policymakers are watching the data closely to ensure we don’t all get soaked.

This week's biggest news adds to the complications in energy markets.

We expect the Fed to raise rates continually this year.