The macroeconomic picture still doesn't support the case for monetary tightening in the eurozone. 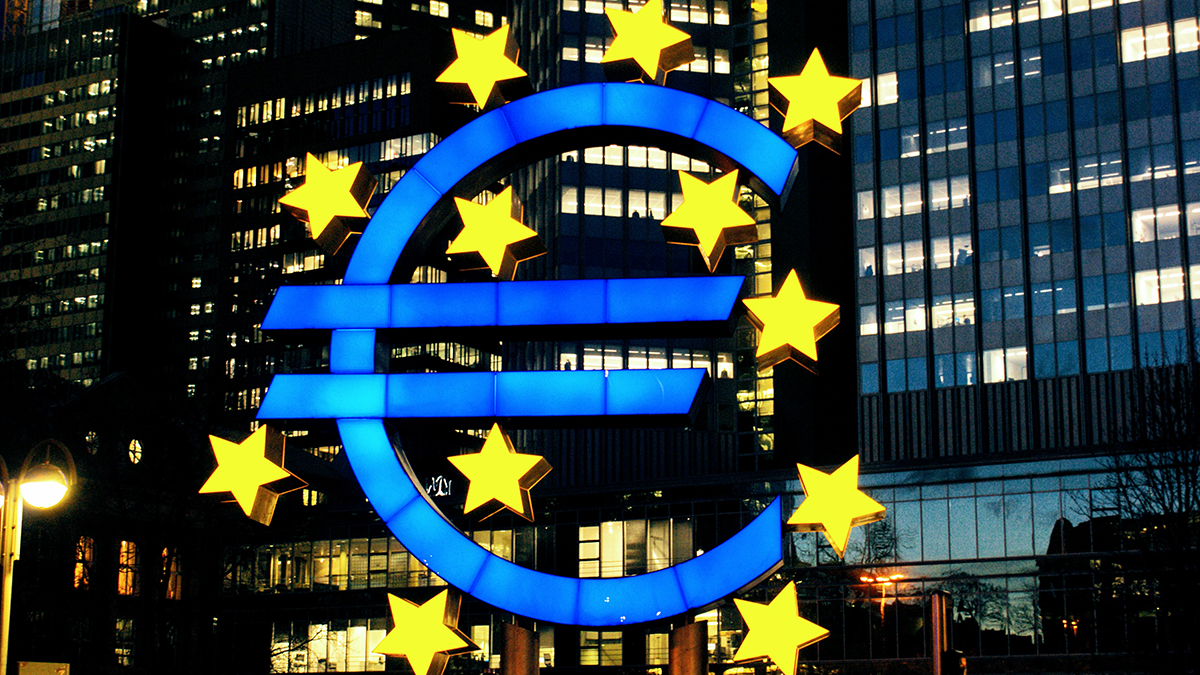 Soaring prices have emerged as a feature of the pandemic-era recovery and a top risk for investors, consumers, businesses and policymakers. Americans are living with the highest inflation in four decades, the British are witnessing a surge in prices not seen in 30 years, and the Europeans haven’t seen prices rise this quickly since their aggregated recordkeeping began thirty years ago.

While cost pressures have sprung the Federal Reserve and the Bank of England into action, the European Central Bank (ECB) is holding firm. One reason why is that inflation has a very different texture in Europe than it does in other parts of the world.

After struggling for years to reach its inflation target, the eurozone is catching up with America and the U.K. The headline consumer price index for the euro area came in at 5.1% year over year in January, up one-tenth from December 2021.

Nonetheless, the ECB continues to sound less hawkish than its counterparts. Criticism aimed at the central bank for raising interest rates too soon after the 2008 financial crisis may be a reason behind reluctance to tighten policy. But there are several macroeconomic influences that justify the ECB’s stance. 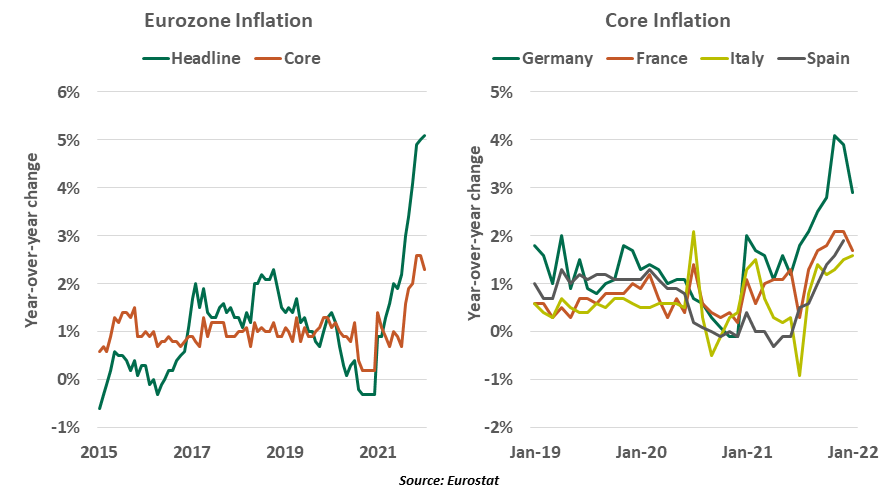 The eurozone harmonized consumer price index (HICP) is a weighted composite of 19 member states. While aggregate eurozone consumer prices have soared, there is a significant divergence at a country level. The core component is still below 2% in three out of four major member states, which diminishes the urgency of tightening monetary policy. Further, the ECB’s forecasts show inflation falling below the 2% target in 2023.

Secondly, there are many more unusual factors affecting eurozone inflation than there are in other regions. Reopening created a huge base increase last spring, which will be receding in the coming months. Supply-chain blockages and uncertainties about the supply of natural gas from Russia have also proved persistent, leading to higher price pressures. Tax changes in member states have also created some volatility in the overall numbers.

The volatile energy component has been the biggest contributor to higher headline inflation in the common currency region. Large base effects caused by higher oil and gas costs have led the energy index upward by a whopping 29% over the last year. By contrast, the other three major constituents, food, non-energy industrial goods and services, account for less than half of the price rise.

Core inflation has risen in the eurozone as well, but is not close to being as threatening as it is in the United States. Even as the year over year change in the total HICP rose to a record high last month, the core measure dropped 30 basis points to 2.3%.

There are early signs that supply-side bottlenecks are easing, and input costs for raw materials and intermediate products are decelerating.  January’s softer non-energy industrial goods inflation further supports this view.

Third, the euro area economy is further from full capacity than other regions are. Activity has surprised on the upside in recent quarters, but output only recently returned to its pre-pandemic level. Initial fourth quarter gross domestic product estimates suggest that the eurozone economy slowed substantially at the end of 2021. With the region’s largest economy, Germany, on the edge of recession, the macroeconomic picture doesn’t support the case for a shift in the ECB’s policy stance.

Once the dust around the pandemic settles, structural issues such as inefficient labor markets, excessive regulations, and large informal economies in countries like Italy will come to the fore again. In absence of reforms, these factors will continue to weigh on longer-term growth prospects and in turn, on inflation.

Aggregate demand in the eurozone is nowhere near as strong as in the U.S. The size of economic stimulus implemented by the European governments has been substantially smaller, and deficit spending more constrained. Household income held steady in the eurozone, as opposed to a substantial increase in the U.S. 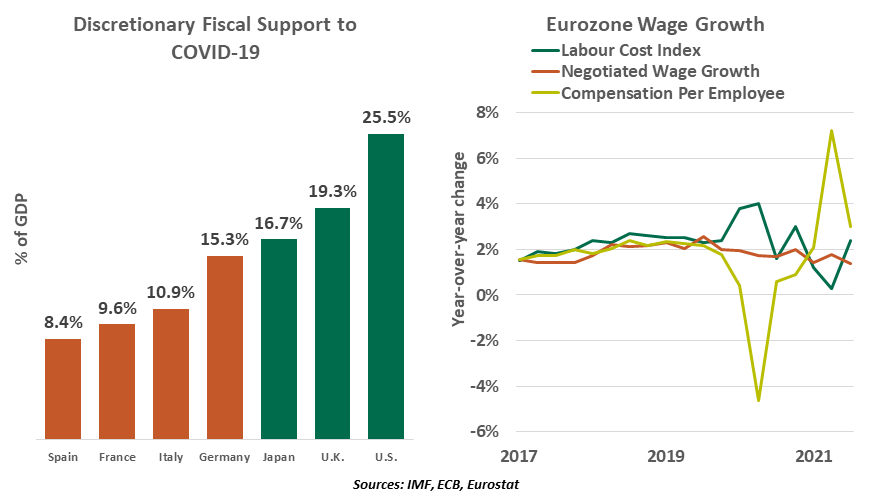 European labor markets have witnessed a sharp recovery. Unemployment is falling to historic lows, and businesses are coping with labor shortages. That said, we are yet to see any clear signs of pressure on compensation. In fact, the ECB’s negotiated wage growth indicator dropped to an all-time low last quarter. This is in sharp contrast to the U.S., where wages are on the rise.

The macroeconomic picture still doesn’t support the case for a substantial tightening, but the ECB will have to be alert if consumers and businesses start getting accustomed to rising prices. Tensions between Russia and Ukraine will continue to put pressure on energy prices. If sustained, this could start feeding into some of the core items like transportation services. The longer that inflation stays above the target, the greater the chances of starting a wage-price feedback loop.

Euro area consumers, businesses and banks are sitting on ample cash, which does not stimulate inflation by sitting still. If the economy continues to mend, and disbursements under the Recovery Fund supplement pent-up demand, pressure on the prices of goods and services could increase. These circumstances could cause a rethink of monetary policy later this year.

The mistake the ECB made by raising rates in 2011 still haunts them. But this time around, they appear to be getting policy right.

Federal support is no longer needed, but states aren't turning the funds down.

The potential economic costs will hopefully be significant enough to head off Ukraine-Russia conflict.