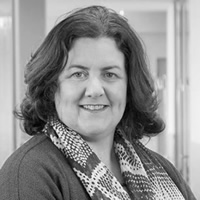 As Senior Vice President and General Manager, Catherine Duffy has overall responsibility for the strategic development and day to day operations of Northern Trust Limerick which comprises over 1,200 employees in two different office locations. In 2016, Catherine became the CEO of Northern Trust Fiduciary Services Ireland Ltd.

Catherine joined Northern Trust in 2000 following its acquisition of Ulster Bank, where she started her career in Control in 1990. Prior to her current Limerick managerial role which she undertook in 2008, Catherine was manager of Transfer Agency in the Dublin office. Her previous Northern Trust roles included: Head of Investment Operations, Corporate Actions Manager and Head of Control.

Catherine was President of the Limerick Chamber from 2015 – 2017 and is currently on the Board of the American Chamber.